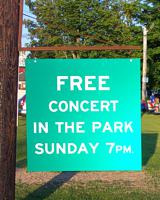 The Benefit Music Festival took over the Franklin County Field Days grounds yesterday with continuous music on two stages. The proceeds will benefit Camp Ta-Kum-Ta and help the Town of Highgate build a band stand.

Summer Sounds got its start 25 years ago when then-Town Manager Ray Tanguay came to me with $200 in his hand and said “Let’s have some concerts!”

You can’t put on a major concert series for 200 bucks, so I conned, er, invited most of the local businesses to kick in and it started a plan and a series. The plan was for the municipalities to underwrite the series and for local businesses to sponsor each concert. We encourage local nonprofits to “host” each concert with a social to show the flag and earn a few bucks for their own causes.

Over the years, more than half of the Franklin County towns have welcomed Summer Sounds. The concerts are always on Sunday night, always in a Town Park, always at 7 o’clock, and always free.

Yesterday we capped a quarter century of Sundays with just the best benefit concert: continuous music on two stages from 2 p.m. right through about 9; admission was by donation.

This has been a transition year for Summer Sounds. We’ve had stars from the first years of the series as well as some younger performers who will grow the concerts for the next 25 so we booked the same yesterday. All the bands and everyone else working volunteered their time.

Volunteering is the key. The bands jumped aboard right away. Our hosts had more than 30 “helpers” flipping burgers and serving up popcorn and snacks and coffee and desserts, with even more behind the scenes baking and helping. Half a dozen MVU High School seniors and a couple more BFA seniors helped SWMBO and our son, Karl, dip ice cream, serve sodas, and sell tickets. My friends at TimKath Productions did the sound magnificently and kept us on track despite the monkey wrenches I kept dropping in the schedule. The Highgate Highway Department turned out in force today to put the Field Days site back in order.

My own daughter dropped in Saturday evening. “What ya doing tomorrow,” she asked.

“Going to the concert,” I said.

We were all over our email list, the posters, the newspapers, the event calendars, the television, the radio, the Facebook.

It was the Patriots v. Bills that everybody stayed in for (the Pats won). That’s my story and I’m sticking to it. I just wish I had a magic wand that let me add my event to everyone’s calendar. Especially yours.

Bunch of people I need to introduce.

Starting in 1994, Jenni Johnson has played more Summer Sounds concerts than anyone else. She is the Billie Holiday of Vermont, except she was once a Supervisor of Physics and Counselor at MIT. Singing jazz, blues and funk has been the center of her life since she was a teen in New York City. Best jazz singer I know bar none and wonderful with kids.
incaHOOTs has exploded in popularity across Northwestern Vermont this year. The Plattsburgh-based band first played Summer Sounds in 2003 and have brought their country-rock-jazz-pop music to venues from Highgate twice this year to Nashville last weekend.
Jon Gailmor is about the most eclectic, emotional, exhilarating, optimistic, and provocative rock star I know and he’s done it in front of the flagpole in Highgate Municipal park and fronting the Vermont Symphony in the Flynn. His low in cholesterol original music, ballads, and ditties will make up for the ice cream and cake. He first played for me in 1997. OK, he’s actually a solo performer who is kind of folkie, kind of rocky, and sometimes a little dirty.
Jennifer McConnell is gifted and inspirational singer and a music teacher in Franklin/Sheldon. She will be one of the two new leaders for the St Albans Community Band.
The Sky Blue Boys are “just” a couple of fellows with a mandolin and guitar, but what a couple of fellows. Banjo Dan and Willy Lindner are actual brothers for this “brothers duet” that was the predominant format in this country in country music of the 1930s and 40s. They first appeared in Summer Sounds in 1994.

We introduced Summer Sounds, Gen II, (we called them the Summer Sounds Singers, musicians still in high school just getting their performance chops). There are a lot of these kids singing at open mics, in talent shows and school musicals, and in some cases in Fenway Park.

Drew Briggs went to school for French and linguistics and learning languages is his passion. He’s a standup comedian who really enjoys running improv games (think Who’s Line Is it Anyway?).
Savannah Burns is 15, lives in Swanton, and attends MVU. She has been in two musicals, Annie and Shrek the Musical. She had a leading role as Cinderella in the one act play, Into The Woods, at Johnson State College.
Soukaina Jamil is 13-year old seventh grader from St. Albans Town has been singing since she was in the third grade. She also plays the trombone and is teaching herself how to play the ukulele.
Mingo Maquera is 17 and a senior at BFA-St. Albans where he is the male lead in the production of Footloose November 12-14th. He’s also an extremely accomplished vocalist and plays keyboard, all manner of guitar and the drums. As Andre and Wendy Maquera’s son, he has music in his blood.
Rosie Newton is 14 and a freshman at BFA-St Albans. She’s frequently on stage in both school and local theater productions and is a member of the Contois School of Music band. Oh, yeah. And she sang the Star Spangled Banner at Fenway last year and for the Lake Monsters this year.
Jaylin Seaman is 14 and a freshman at BFA-Fairfax. She plays Princess Fiona in Shrek the Musical at BFA-Fairfax November 12, 13, and is a member of the Vermont Musical Theater Academy at Spotlight on Dance.

It was a day of the best music around by everyone and wonderful memories for all of us. Here are some of mine:

Wednesday morning on the phone with Russell Crowe. Really. Green Mountain Coffee had promised us a donation but a technical glitch kept us from completing the order. Russell was the calm island in a sea of chaos, something you might not expect from the silver screen. “I wouldn’t mind getting just one of his paychecks,” he said. He also moved heaven and earth and the coffee arrived on time. It was c-o-l-d yesterday and people were glad to have it.

Friday, Hannafords manager Sara helping us load up my truck with a “pallet of pop.”

Sunday morning, early early, the geese in our little cove talking about how cold it was and planning to leave right away for Pennsylvania.

Jenni singing Happy Birthday to Soukaina Jamil who had just turned 13. We surprised and wowed Soukaina.

Rosie singing Hallelujah. In the last decade or so, Leonard Cohen has finally grown into this song and is old enough to sing it. Rosie hit it out of the park. Her voice is right for the song and she brought the gravitas it deserves. That just blew me away.

Jon and I realizing we had spent some of our early childhood (where we never grew up) in Quaker country, 20 or 25 miles apart in Pennsylvania (he likes to say he was born in New York State and failed to grow up in Philadelphia, up by Overbrook when my grandfather was there for Temple). He’s a Penn grad.

I sure do wish more people had been there.