Bagpipes get no respect.

Q. What’s the definition of perfect pitch?
A: When you toss a banjo in the dumpster — swish, nothin’ but net — and it hits the bagpipes.

We went to a roots music concert last week, one in which I was the announcer. There was a piper but I was good. I didn’t tell a single bagpipe story and it about killed me not to.

I live in the middle of the Florida Keys on an island I can drive to. Three generations of my family has owned that house, so we have some history but we are newcomers compared to the real conchs.

Q: What’s the first thing a bagpiper says when he knocks on your door?
A: “Pizza!”

I wasn’t even born when the (pre-Global Warming) Labor Day hurricane destroyed the Florida East Coast Overseas Railroad or when Key West’s Mallory Square was the anchorage of pirates, the the center of the shipwrecking industry, or the assembly point of American forces for four wars.

I also missed the Mallory Square Sunset Celebrations of the 60s when the hippies and gypsies and freaks would watch Atlantis rise mythically out of the sunset clouds. 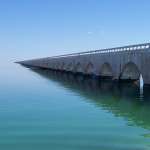 My first drive across the 7-Mile bridge was an eye opener. Florida DOT built the road on top of Henry Flagler’s historic “railroad that went to sea.” They poured two narrow lanes of concrete, then painted the old tracks white and used them as guardrails. The lanes were so narrow that two trucks would slap mirrors passing. Until 1982, when the adjoining new bridge opened, it was the only road cars could take to Key West.

My first memory of Mallory Square in Key West was a funky free-for-all with creosote piers and gravel and street vendors. The Cookie Lady was there as were artists and jugglers, jewelry crafters and a cat herder, and the southernmost bagpiper.

Alfred Hitchcock once said, “I understand the inventor of the bagpipes was inspired when he saw a man carrying an indignant, asthmatic pig under his arm. Unfortunately, the man-made object never equaled the purity of sound achieved by the pig.”

We’ve done the proper touristy stuff. We took selfies at mile marker 0 and at the Southernmost point. We have paraded with the pets at Fantasy Fest. And we have dangled our feet over the edge of the pier, waiting for sunset. 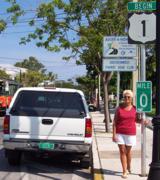 You can’t do that at Mallory Square any more. It is too clean, too concrete and the cruise ships have replaced the pirates.

Will Soto was setting up his high wire poles one evening when SWMBO and I were indeed sitting on the edge of the pier with our (bare) feet perhaps a yard or so above high tide.

“Tonight will be the best night of the year,” Mr. Soto said to us as he set one pole right behind us. He wandered away, pulling his wire with him and worked on the other pole.

Then he came back.

“Tonight will be the best night of the year,” he said again as he tightened the two guy wires. I figured this was just the normal hyperbole, drumming up trade. We were, of course, the trade. This combination of work and commentary continued for a couple more round trips.

He finally went back to the other pole to do the same and then returned.

“Tonight will be the best night of the year,” he said and I couldn’t stand it any longer.

“The bagpiper called in sick.”