I found 65 cents on the road this morning. Since that’s a nickle more than I made in an hour on my first job, I was aghast. 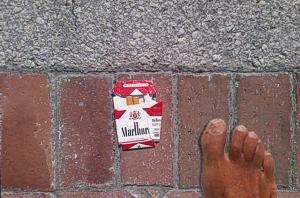 This poor, abandoned pack of smokes fell out of someone’s pocket to be run over by at least one small truck.

I always hated it when the pack fell out of my shirt pocket but I hated it even more when it was my Zippo lighter and I was on the boat. If you find a 40-year old Zippo in the grassy bottom at the bend of the Chester River at Devils Reach off what used to be a corn field, it’s mine. It will probably still work.

Regular readers may recall that I quit smoking for my birthday in 1976, in large part because it had gotten so expensive. I smoked Between the Acts, a little cigarette-shaped nicotine delivery device (NDD) made with cigar tobacco. It was a convenient package because one could smoke an entire “cigar” during a short intermission. I liked the taste and the fact that they cost only 35 cents per pack because cigars weren’t subject to the same taxes as cigarettes.

Minimum wage was $2.30/hour in 1976 except for farm workers. Farmers reached parity with nonfarm workers in 1977 but anyone “working for tips” such as restaurant staff and theater ushers remain uncovered by minimum wage laws.

Marlboros (we didn’t have to call them “Reds” in 1976), jumped to $5/carton that year on state taxes and the state legislature planned to add the taxes to cigars like mine.

Minimum wage smokers then had to work about two-and-a-half hours, after deductions for Social Security and a dime of income tax, to buy a whole carton of cigs.

Every year, the Awl “checks the prices of cigarettes in all fifty legally recognized states of this fair Union.” Founded in 2009, the Awl publishes “the curios and oddities” of the Internet.

Minimum wage smokers today need to work about ten hours or a quarter of a work week, after an 89 cent deduction for Social Security and Medicare and another half a buck of income tax, to buy a carton of cigs.

So I have to wonder, How does anyone afford to smoke, let alone to lose, cigarettes?