Here are two stories from this nearly naked city. I make no claim that they are related.

In April, 1982, the United States Border Patrol set up a roadblock at the “choke point,” the Last Chance Saloon in Florida City, to search for illegal aliens and drug runners. See, the Keys are islands you can drive to, but just one, two-lane road connects us to the United States.

The blockade of the Florida Keys backed up traffic and shut down the rum-and-beer trade in the Keys.

My aunt and uncle loved the Keys and had spent several years scouting out the best places to homestead.

Boppa read the news and the tea leaves and had a finger on the pulse from the piper on Mallory Square to Theater of the Sea, the 1946 marine mammal park on Islamorada.

Roadblocks? Pissed off populace? Seceding from the Union? A naval battle with a loaf of stale Cuban bread?

Boppa put our 1734 farmhouse on the market.

The Border Patrol stopped every car leaving or entering the Keys.

“We seceded where others failed.”

Newspapers and television alike reported on the unprecedented “Border” roadblock within the United States itself. Expectant visitors canceled reservations to come to the Keys because the news said they wouldn’t get in.

I took another moving van of furniture north to North Puffin.

The City of Key West filed for an injunction in federal court but the court refused to enjoin the Border Patrol from treating the Keys like a foreign country.

The world press asked “What are you going to do, Mr. Mayor?”

“We are going to secede,” then-Mayor Dennis Wardlow replied.

Boppa auctioned some of the generations of family furniture (remember, we came from an old Quaker farm family that never threw anything away).

And on April 23, 1982, the Conch Republic raised its flag over city hall and the schooner Western Union attacked the US Coast Guard Cutter Diligence with water balloons, Conch fritters, and stale Cuban bread to begin the Great Battle of the Conch Republic.

The Diligence fought back with fire hoses.

Boppa bought a cute little 1968 cinderblock house here in South Puffin and the rest, as they say, is history.

33 years later, Conch patriots started celebrating the anniversary on Friday and will continue through Sunday, April 26. There will be a drag race on Duval Street, a sea battle featuring historic tall ships, a parade, and a bed race that may be “the most fun you can have in bed with your clothes on.” 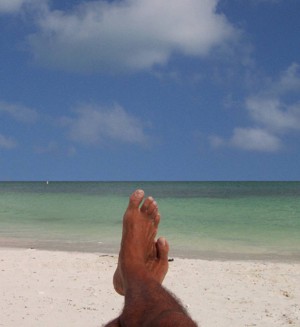 33 years later, Boppa is gone but well-remembered and I shall hoist a Rolling Rock in honor of those who can be hoisted by a schooner with water balloons or a 61-year old man on a flying bicycle.

1 thought on “Flying the Flag”