Subtitled: And I’m pretty fond of my come-along.

I spent Friday cleaning out the cellar. It was sunny and pleasant outside and I need the space for a root cellar.

This house was built about 1855. We know it wasn’t here for the 1850 tax roles (the earlier farmhouse was listed) and we know it was in 1860. We also know it had a cellar because

Cellars in houses of a certain age are … interesting. This one starts with a dirt floor and a cistern.

I’m not sure exactly how many generations of the Stevens family worked this farm. Ira Allen first rented, then sold 180 acres to W.C. Stevens around the turn of the 19th century. He built the original house here on the rise where this house sits now. The original road from St. Albans to Canada came right past the front door and up across our driveway before heading north. The family tore down that first house but salvaged most of the lumber and the rubble stone foundation to build the house we live in today. They extended the foundation, doubling its footprint to build the new house with two wings, one brick, one frame. Its style is country Victorian.

One bequest in the family left “one bedroom plus full use of the cellar for storage” to the widowed Mrs. Stevens. She made good use of it.

We bought the house from the widow of a local judge who had in turn bought it from Mildred Stevens.

They made good use of the cellar, too.

It was sunny and pleasant outside so I spent the day cleaning out the cellar. Sheesh. Anne and I managed to haul out the 1950s frig that came with the house (we had put it down there and used it as our “second frig” until it stopped making cold), the freezer that froze up this winter, and a pair of water tanks one of which still had about 10 gallons of water innit. 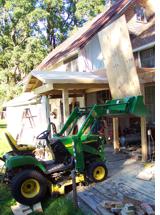 I lurve my tractor. It’s a “compact,” meaning it fits in between the typical lawn and garden style and the heavy duty workhorses of the modern farm. With about 24 diesel horsepower, it could pull a two-bottom plow better than my Ford 9N and yet it’s small enough to fit most places. And it has a 54″ wide bucket.

My original plan, conceived not while in the shower, was simply to reach in the cellarway with the bucket, strap the stuff to the bucket, and deadlift it straight out. Unfortunately, the doorway is 6″ narrower than the bucket.

Time for Plan B.

I used the 2×12 I otherwise use for a scaffolding plank as a ramp. My tiedown straps are missing again so I dug out the anchor rode from the boat and put a couple of loops around the frig and dragged it up the ramp with the tractor. Did the same with the tanks. The freezer, actually lighter than the frig, was harder because it wanted to stand up on its side instead of sliding on its lid. I pulled it with the comealong because that was easier than dragging down the 100 pounds of railroad chain so I’d have enough reach.

I lurve my tractor. The top photo is part of the porch I finished four years ago; the lower one is the tractor lifting plywood onto the rafters to finish the now-finished porch. You can see the cellarway bay framed by the bucket arms, to the right of the portico. Having that bucket didn’t just make these jobs easier. It made the jobs possible.

The final indignity of the cellar project was to haul all that stuff up to the truck for its last open air ride to Hodgson’s. I used the tractor bucket.

The whole job was still a lot of stairs and a lot of work but I now have a lot more open floor down there. Maybe I’ll build some more shelves…

4 thoughts on “I Lurve My Tractor”