When I got the bill for my July Obamacare premium, I shrugged it off.

See, I had changed from a Blue Cross Standard Gold Obamacare plan to a Blue Cross Medicare plan as of July 1 and I figured that was just a bill that got mailed the day they got the cancellation.

When I got the bill for my August Obamacare premium on July 5, I shouldn’t have shrugged it off.

When I got the bill for my September Obamacare premium dated August 5 in today’s mail, I couldn’t shrug it off. 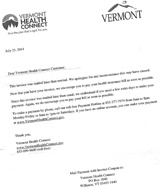 And it turns out I wasn’t alone. The Burlington Free Press reported yesterday that billing problems plague Vermont Health Connect, the state-managed Health Exchange that issues and bills for Obamacare policies.

“Terry Libby has received incorrect bills from Vermont Health Connect since last winter when she first signed up for a Blue Cross insurance plan using the state’s new online website.

“Each month she has paid what she owed, called the state’s helpline to report she was being charged double, and received assurance the problem would be corrected.

“A month later, another incorrect bill would arrive.

I’m more than a little nervous about screwing with my Medicare policy. Blue Cross carried over my same policy number when I changed from Obamacare to Medicare.

I called VHicks (the correct pronunciation of VHX, the Vermont Health Exchange, according to my Blue Cross rep) to question the bill they sent me. See, I had gone over this very issue in depth when I bought the Medicare policy. Blue Cross said they would cancel me out of the Obamacare plan when they opened the Medicare plan. All part of the service.

The VHicks rep said it wasn’t up to Blue Cross to cancel the policy. He said he’d try to process the cancellation retroactively but no guarantees.

“No worries,” that rep told me. “Your Obamacare plan ended June 30 and your MediGap started July 1.” She also said no way VHX had any way whatsoever to cancel my Medigap policy.

“The government is so not trustable about things like this,” Liz Arden said.

“Not so trustable? Can you spell C-H-A-R-L-I-E   F-O-X-T-R-O-T?” Rufus asked only somewhat rhetorically.

“There is no way on God’s green Earth we should be putting up with this level of …. well, it ain’t mediocrity, because that would be far superior to what we are getting.

“You can quote Rufus on that.”

“You don’t want people to get health care!” Annabelle Proctor screeched the last time I wrote. Ms. Proctor holds an undergraduate degree in dance from Bennington College and a graduate degree in Social Justice from Planet Marlboro, Vermont’s two most liberal and free-thinking schools.

My other Liberal friends all seem to echo that.

Nothing could be further from the truth.

I want my doc and yours to do better doctoring than they do today.

I want every citizen to have access to whatever doctor or other healer they want.

I want every visitor to be able to pay Fee for Service to whatever doctor or other healer they want.

I want the cost (not just my bill) to be less than a Moon shot.

Just like it was in 1976 when five days in Cabarrus County Memorial Hospital cost me $254 after a racing accident. That’s less than a hammer, a toilet seat, or a week’s worth of Starbuck$.

And I certainly don’t want the folks who brought us $436 hammers, $640 toilet seats, and $7,600 coffee makers to flush my policy when it gives me a heart attack.

Yep, we’re paying for it now.

4 thoughts on “Paying for It”