I got to thinking about them as people told me about geezerhood and codgerness this past week.

There’s some truth to that, although I’ve never heard anyone under 20 say it. In a much earlier op-ed, I wrote about the different important but arbitrary ages. These limit the minimum age at which we humans can take part in some exciting activity:

• 16 gets a driver’s license in most states. Most boys wish it were 14; most parents, 35.
• 18 is the minimum age to be eligible to vote in a public election. Except it used to be 21. Or 16 in Takoma Park, Maryland.
• 21 is the youngest one can be to drink because the National Minimum Drinking Age Act of 1984 withholds revenue from states if they let anyone under that age buy booze. Despite the Internoodle rumor, it is not true that the minimum legal drinking age will be raised to 25 as of August 2.
• 35 is the minimum of gray hair allowed to be President although in practice Teddy Roosevelt was the youngest person to assume office at age 42. JFK was 43-5/8. Mr. Clinton was 46-1/2.
• 65 is retirement age. Except when it isn’t. It turns out you can collect partial Social Security at 62 but full retirement is older than 65 for anyone born after 1937. Medicare, however, kicks in at 65.

By now you may have guessed that I have attained each of those arbitrary numbers and now I have a problem: I don’t know how to be a codger.

Codger /n/ käj-r — an elderly man, especially one who is old-fashioned or eccentric.

OK, I’m sometimes old-fashioned and usually eccentric but I was that way 30-40 years ago. 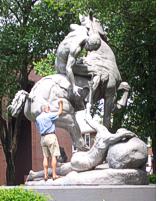 “Horsemanship through the history of all nations has been considered one of the highest accomplishments. You can’t pass a park without seeing a statue of some old codger on a horse.”
–Will Rogers

That’s another good one, but the closest I’ll get to being that behorsed statue was painting the one at Stevens.

Now, a geezer wants to drive as slow as possible. A true geezer will pick a speed ahead of time, say, seventeen miles an hour, and drive that speed under all conceivable conditions, no matter where, no matter what. With the turn signal on. A geezer will put the turn signal on when he buys the car and then just leave it on until he trades it in. The geezer car is actually three to four normal-size cars welded together. It should be much bigger than anything else on the road, or even the road itself. The hood should be so big that it’s impossible for the driver to tell what lane he’s in, sometimes even what zip code he’s in, by merely looking out the window. Planes could take off and land on the hood of the geezer car.
–Dave Barry

OK, I admit I don’t drive as fast as I did when racing, but that happened when I discovered how much I hate paying $3.799/gallon for all that gas. I still managed to beat the Coco Plum land speed record in a Lotus a couple of years ago.

The problem is that there is no Federal educational program for geezerhood. This leads to an inevitable conclusion. I have discovered, to my great pleasure, that geezerhood arrives a minimum of 10 years after one’s current age.

The real milestones are our losses in my birthday week:
Actor James Garner died of natural causes at home on Saturday night. He was 86. From Maverick and Rockford to Grand Prix, he was one of my favorites. And I have long used his answering machine message.
Astronaut and test pilot Henry Hartsfield died at 80. He commanded Discovery and Challenger missions.
John Melvin was an engineer, academic and racing safety expert in NASCAR.
Actress Elaine Stritch.
And Heinz Zemanek who developed the first complete transistorized computer in Europe and defined the programming language PL/1.