“Have you been inside?” my friend Ashley Proctor gushed. “It is really something!”

A new house went up on my block in South Puffin. The architecture is interesting in that generic nouveau-riche-Keys-stucco style. It has large windows that do not open, square pillars defining a 1-1/2 story entry, and a scant foot or two on each side for dense landscaping. And we are blessed that it is not another hacienda.

Ms. Proctor is a young social engineer in Madison, Wisconsin. She dropped in to get away from the frozen north; my neighbor took her on “the tour.” Upmarket furnishings had never before turned her head.

I’ve discovered where McMansion builders get their decorating tips.

I spent the weekend in Las Vegas where we passed a Russian mobster blipping the throttle on his Lamborghini Gallardo and checking the time on his Rolex. Later, we watched an old-style, 30-something Vegas mobster in a sharkskin suit busing tables at the restaurant. (It was a better meal than the $60 Kobe hamburger, by the way).

Tranquility isn’t the word most visitors would use to describe Las Vegas. In fact, there are 12.5 million LED lights across the barrel roof to accompany the high octane music and light show of Fremont Street. And then there’s the Strip, the 4-mile stretch of Las Vegas Boulevard South with many of the largest casinos in the world and over 62,000 hotel rooms, where the night is bright and brash and glittering and loud. 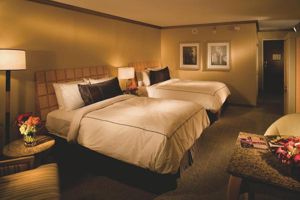 Just like the MGM Grand or the Venetian, that new house in South Puffin has a broad expanse of marble floors, recessed lighting for that intimate football stadium feel, and moldings. Ornate skirting boards. Beading at the chair rails. Ropework, dentils, and egg-and-dart details on the crown moldings. One room, done in black-and-white, cries out for a zebra-skin rug and zebra-striped linens. They did exercise restraint. There was no gold leaf or other gilt.

I’m not sure whether to blame the decorators the McMansion builders hire or the owners themselves but I’m hoping they buy the entire 21 piece living room set so at least everything matches.