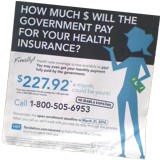 Blue Cross blew an advertising flier into the Herald yesterday to remind us that the open enrollment deadline is just 28 days away.

Want to know why Obamacare can’t flourish over the long run? Click through to see the slightly crumpled flier. I’ll wait.

“A democracy cannot exist as a permanent form of government. It can only exist until the majority discovers it can vote itself largess out of the public treasury…”

“The American Republic will endure until the day Congress discovers that it can bribe the public with the public’s money.”

Alexis-Charles-Henri Clerel de Tocqueville was a French political historian best known for the two-volume Democracy in America and for The Old Regime and the Revolution.

In 2000, the health policy journal Health Affairs found that the United States spends “substantially more on health care” than any other country. The use of health care services in the U.S. is below the Organisation for Economic Co-operation and Development median by most measures. The study also concluded that the 19 next most wealthy countries by GDP each pay less than half what the U.S. does for health care.

The Centers for Medicare and Medicaid Services reports that in 2012 U.S. health care spending increased 3.7% to $2.8 trillion, or $8,915 per person. 3.7% is “slowest growth rate on record.” That sounds like welcome news until you look at the real numbers:
1. The official Cost of Living increase is less than half that.
2. Total annual health care spending at this “slow growth rate” will double in less than 20 years, to $17,830 per person.

HOW MUCH $ WILL THE GOVERNMENT
PAY FOR YOUR HEALTH INSURANCE?

The Congressional Budget office estimates that Federal spending on major health care programs will rise from $2.8 trillion in 2012 to $23.8 trillion in 2038. “A trillion here a trillion there and pretty soon you’re talking real money.”

We can’t blame Blue Cross for this; in fact, we ought to thank them for the reminder.

See, the final vote tally for the Obamacare “reform legislation” was 60 Senators plus 219 Representatives. 34 Demorats in the House joined all Regublicans in both houses in opposition. Want to see who would bribe the public with the public’s money? Here’s the blacklist.

“After that, the majority always votes for the candidate promising the most benefits with the result the democracy collapses because of the loose fiscal policy ensuing, always to be followed by a dictatorship, then a monarchy.“

Horse thievery used to was a hanging offense.

Steven Brill wrote in Time Magazine, “Put simply, with Obamacare we’ve changed the rules related to who pays for what, but we haven’t done much to change the prices we pay.”

3 thoughts on “How Much Will the Government Give You?”