Banks and post offices are service businesses, same as movie theaters and restaurants.

Liz Arden and I both ordered new phones. Hers is scheduled for delivery today; mine allegedly shipped today. And a laptop SWMBO ordered is sitting at the post office. We can’t pick that up until tomorrow.

“I think FedEx does not necessarily follow bank holidays,” she said. 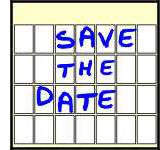 Today’s holiday was changed to the third Monday of February in 1971 in compliance with the Uniform Monday Holiday Act. Advertisers morphed the name into “Presidents’ Day” because the federal observance of Washington’s “birthday” must fall between February 15 to 21 and never include Lincoln’s birthday nor Washington’s.

Members of the Armed Services don’t get three-day weekends.

“Thank goodness they don’t drag me out on Monday mornings,” Phil told me earlier this year. If Candle Mas Day is bright and clear, There’ll be two winters in the year. I guess even Congress was smart enough not to condemn us to a Monday and six more weeks of winter all on the same day.

There was a time, back before you were born, back when I walked to school, uphill both ways, that most companies followed the same holiday schedule as the federal and local governments and that schedule matched actual birth and event anniversaries.

“Not so much any more,” Ms. Arden said. In fact, her workplace has pared official holidays down to New Year’s Day, Memorial Day, Fourth of July, Labor Day, Thanksgiving Day, the Day after Thanksgiving, and Christmas Day.

They did give back, with three or four “floating” holidays. Some employees use them for celebrations like One Ring of Sauron Day. Others bunch them up around Christmas.

I liked that change as long as they didn’t shortchange us in the process. We’re (mostly) still getting 10 days off which was about the norm I remember. We’re paid for 260 workdays in a non-leap year but we typically work no more than 240 of them and usually have some paid “sick” days as well.

“I do like the flexibility,” she said but it irks her that not to get mail delivery on days she has to work, and the bank is never open on a day when she needs to replace a lost credit card. “I want everyone to follow my schedule, dammit! Except, of course, if I’m taking a holiday I want businesses I use to be open.”

A decommissioned Russian satellite is headed for home and an asteroid the size of three football fields will do a flyby today.

Today is also Rene Russo’s 60th birthday and not George Washington’s no matter what they said in Congress or on weather.gov.

And despite all that, I still need to write a blog and a newspaper column and do laundry.

8 thoughts on “Thoughts for President’s Day”