Floating objects we call “chugs” wash up from time to time on the beaches here in the Keys. Cuban boatbuilders work with materials scavenged from junked cars, crates, roofs, packing. 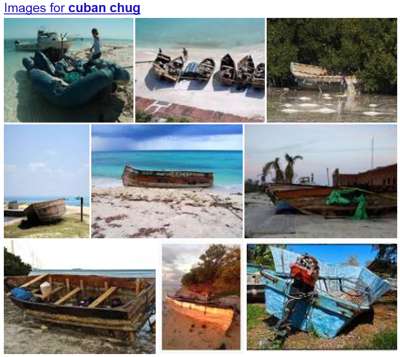 These almost-boats are small enough to build in the sheds and garages of Cuba where craftsmen keep ’53 Chevvies running and can make a Vermont farmer cry with their ingenuity to recycle and repurpose and reuse 60-year old iron.

Then 20 or 30 desperate people crowd aboard for a journey of days or weeks across open ocean, dodging Cuban and American patrol boats, huge, blind cargo ships, go-fast drug boats, and other sharks.

The salvaged engines have only one direction: north. The engines run at a chuggita chuggata low speed slowly propelling people who hope for the best when they leave everything behind.

In spite of our political malfugalties, those 20 or 30 people are desperate to get one foot on American soil.

Many chugs look like boats for obvious reasons. Humans arrived on Borneo by “boat” at least 120,000 years ago. Egyptians knew how to sew wooden planks into a ship hull as early as 3000 BC. Boats have evolved since then but most still have a pointy end to go through the water first and a hull shape that is easy to push. Most chugs are like that.

A different chug arrived on Coco Plum last Fall. It is unique in construction with a welded rebar space frame, metal roof panels hammered into shape, and styrofoam blocks as flotation and deck combined. 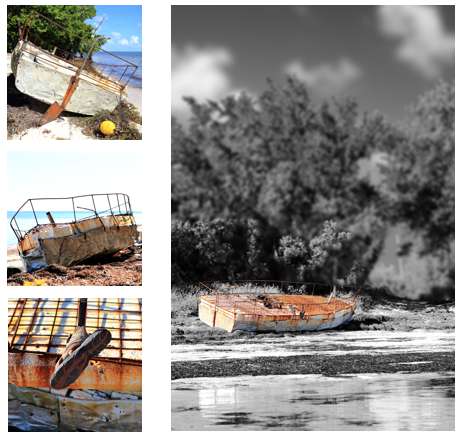 The boatbuilder impressed me for inventiveness and resourcefulness. Many of these unseaworthy boats sink; the Styrofoam blocks might have been awash under the load, but they would support it. The lightweight roofing protected the flotation from abrasion. The rebar frame kept the people aboard and kept the boat together.

I’ve wandered over to Coco Plum to photograph the chug several times, including yesterday, and ended up with a pleasingly good batch of images. I had pre-planned, so I knew what I wanted to compose. And I checked that the tide would be out at the time the light was right. The vessel was a little higher on the beach than I remembered so the background was within the Depth of Field zone but I stood in the water and shot with the 100mm lens. The detail is so fine that you can count the threads on the rod used to secure the hull to the top frame.

I like these images; this album will continue to grow.

I’m thinking we want anybody that resourceful to live and grow here, too.

The “wet foot, dry foot policy” is the Cuban Adjustment Act of 1966 that permits that anyone who flees Cuba and makes it onto United States shores can to pursue U.S. residency a year later. Any Cuban caught on the waters of the Florida Straits (hence the “wet feet”) are sent home or to a third country. Any Cuban who makes it to shore (“dry feet”) can stay. The law provides for expedited legal permanent resident status and, eventually, citizenship.

News:
A Key Largo man tired of “illegal immigrants” was jailed for threatening a man with a knife after asking a group of people for “their papers.” (The 50-year-old construction worker he pulled the knife on is from Miami and was born in the United States.)

At least 18 Haitian migrants died on Christmas day as their boat carrying 50 people capsized off the Turks and Caicos islands. Eleven Haitians died in 2012 when a boat carrying 28 people from the Bahamas to Florida sank.

Forty residents of Perico, a town about 100 miles southeast of Havana, drowned at sea on a failed attempt to cross the Straits in 2007. The group included between nine and 12 children and expected to make landfall in the Keys.

We have an interesting way of enforcing national immigration policy here in South Puffin. The Key Largo man was arrested for aggravated assault with a deadly weapon, burglary, battery, and criminal mischief. His bond was set at $114,000 but we give the few illegal immigrants we catch free room and board before sending them back.

Can you spell Immigration Reform?

The muttonheads we sent to Washington to fix laws like this are too stupid to fix the problem but men and women and children from every country in the world will risk their lives to get here anyway. Just think how much we could accomplish if people like this chug builder could build real boats here.

On the other hand, I don’t have much use for pictures of cruise ships but I’ll have plenty to photograph as long as people are willing to come here on boats like these.