If your mother’s in the same room with you, stop reading now!

Josh Seftel’s story (A Mother, a Son, and an iPad, on CBS Sunday Morning this week) hit all the right cords for me. Go watch it now. I’ll wait.

My mom developed lung cancer, what the docs thought was non-small cell lung carcinoma (NSCLC). About 85% to 90% of lung cancers are non-small cell. She was a smoker for close to 50 years but quit in the 80s.

She tried a variety of treatments and ended up in a drug trial for one of the then-new NSCLC regimens. It seemed to work; she was in remission for almost five years. Then it metastasized to her brain. 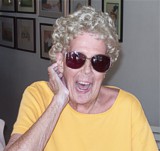 She did chemo. She did radiation. Her hair fell out. She borrowed a blonde “fright wig” from the oncology center in Key West.

I was extraordinarily lucky. See, since I’m self-unemployed as a writer, photographer, boat builder, and engineering consultant, I can arrange my schedule to suit myself. I spent several weeks down here just visiting when she was dying but still comfortable enough to visit.

We caught up. We told the family stories and the family lies. We shopped. We read. We went to a couple of art shows. We played cards and watched tube. We even went out on Joe’s boat.

Now I wonder how much I missed, simply because the technology we take for granted today just wasn’t there.

Skype™ was first released in 2003 and sold to eBay about six months after my dad died but I doubt I was even aware of it for another couple of years after that. I don’t think we started using it before 2011. Now it’s an everyday thing.

I “teleconference” with clients over Skype™ now, which is a PITA because it means I have to put on a shirt. With a collar.

A business in Oregon just interviewed my friend (and North Puffin’s mayor and general roue) Beau Pinder when he was looking for a job out west. Reporters use it more and more to “phone in” stories or to interview news makers.

Anne and I have Skyped™ when she was up north and I down here. Rufus and I used it when he had to head north and I needed to know what to pack in his truck. Nancy and I Skype™ almost every day.

Mr. Seftel uses it to talk with his mother.

“My mommy refuses to connect to the Interwebs,” Liz Arden said. “She doesn’t want any form of computer, nor an Internet account, nor a talking TV.

“I have told her about Skype™ and how easy it is for me to sit on a computer or in front of my tablet and communicate and how lovely it is to see the face of the person I’m talking to. She dislikes computers and doesn’t ‘hear’ how easy tablets and Chromebooks are to set up and use.”

I understand that. My mom refused to learn how a gas pump worked. Mr. Seftel’s mother still seems to have some technical difficulties with her iPad.

Oh, sure, I know all the reasons from technical to political not to use Skype™. <shrug> So use Facetime, or Facebook, or hangout on Google, or ICQ, or ooVoo, or any of a dozen other lesser-known services.

1 thought on “Call Your Mother”