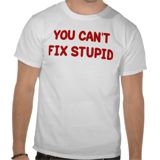 I saw a t-shirt at the Seafood Festival yesterday.

The local rocket scientists have been busy.

One day last week was unusually pugilistic for two of the furrier cops on the Key West police force: a police dog and a horse got punched out. In two separate incidents.

Incident one: A 21-year-old man punched the K-9 in the head when the suspect was found inside the Compass Realty office where cops had found a busted-out window and a trail of blood. They released the hound who hightailed it to the second floor of the building. The human cops followed the dog upstairs to find the soon-to-be-bustee wearing only shoes and socks, punching the dog in the head. [Editor’s Note: Officer Cyress is a 4-year-old German shepherd but Release the Hounds sounds far better than Release the Shepherds!]

Incident two (later that same afternoon): A 28-year-old “farmer” from Ramrod Key interrupted an investigation into underage drinking, leaned on the KW police horse (Key West has a police horse?), and punched it for no apparent reason.

As far as I know, it’s not even the full moon.

We have to go north for the real thing.

“I’m willing to reduce our government’s Medicare bills by finding new ways to reduce the cost of healthcare in this country,” Mr. Obama said last year. 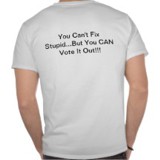 Repuglicans and Demorats continue waging the soundbite fight over federal spending. One side claims that ObamaCare cuts Medicare by $716 billion, for example, mostly by squeezing providers. The other side claims that the “premium support” Medicare forces seniors to pay more out of pocket.

Both sides are right.

Both sides sing the constant chorus of “they’re cutting Medicare” to hammer the other guys and scare the seniors. Seniors vote, after all. Scared seniors vote early and often.

Wow. Just pay less. I’ll do that at the grocery store today. “President Obama says I can pay you 2% less than the actual register tape. Cool.”

How hard is it to figure that cutting actual costs is better than raising actual prices? 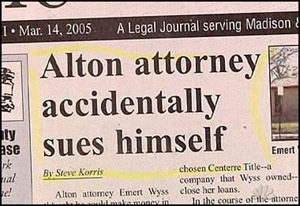 1 thought on “You Can’t Fix Stupid”