I almost managed to ignore an online quiz the other day:

What’s your favorite kind of popcorn when youre at home watching movies?

And why do you have to be watching a movie?

We need a replacement for the microwave popcorn popper the Posts gave us as a Christmas present (not a wedding present as I had remembered) a few decades ago. It worked perfectly. The bowl shape allowed the kernels to explode from a well at the bottom but kept the unpopped ones in that concentrated area for best heating. Pretty much every kernel popped and rarely did any burn. Sadly, it cracked up the side and around the edges and ended up spilling more fluffy, white, popped goodness inside the oven than inside our tummies. 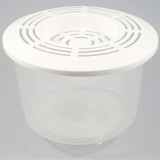 I think air popping is the best way to explode corn kernels; it doesn’t add oil and it doesn’t toughen them the way a microwave can. That said, I prefer microwave popping anyway because it requires the least clean up. I definitely do not prefer the overpriced single-serving bags1.

Woolworth’s was still in business back when they bought that popper; they probably paid about $1.99 but it may have been as much as six or seven bucks. I figure that translates to no more than ten bucks in today’s non-inflationary economy.

Inflation is such an important word. A kernel of corn has three essential components, the outer hull, the endosperm which is starch and water, and the embryo.

The water in a popcorn kernel plays the crucial part in the popping process. When we heat the kernel to about 400°F, the water found inside hull along with the starchy endosperm turns into steam which expands it to about 40 or 50 times its original size. All that steam pressure inflates the hard starch in the endosperm which, in turn, makes the hull pop (it actually flips inside out to allow the steam to escape). Microwave ovens are better at heating water than almost any other kitchen tool.

Google is my friend. Some of the time.

I found what, by illustration, looks exactly like the Posty Popper. And at $4.95 (plus shipping and handling) it was such a deal I bought two, one for North Puffin and one for South.

You can spend a lot more than ten bucks on a gourmet popper, even a simple plastic one, so I doubt if this plastic bowl rises to that level.

In fact, it is a disappointment. The first batch burned in about 20 seconds of popping. The second batch, half the size of the first, lasted a little longer before the flames appeared.

I searched again and found an “Amish Country Popcorn Microwave Popcorn Bowl.” Ten bucks. The description calls this microwave bowl “a great alternative to ‘the bag’! The bowl and lid are dishwasher safe.

Odd to think that the Amish might have microwaves and dishwashers.

I stocked up on sandwich bags. I haven’t burned any of them down yet.

1A one-pound bag of do-it-yourself popcorn in the grocery store here — good for about 10 “individual” Dunning-sized servings — costs a couple-three bucks; paper sandwich bags add another three cents each to the cost.