We made the long drive from North Puffin to South Puffin last week. The consensus was to “avoid New Jersey” which we did, but I still saw the results of Shredder Sandy in the firewood on lawns and highway shoulders across Pennsylvania and parts of Maryland. We had to detour around the Delaware Water Gap on some lovely, twisty windy roads that got my rally juices flowing. Those roads didn’t appear on my map, so I’m not sure I could find them again.

A very nice lady at the Florida border handed us a waxed-paper cup of freshly squeezed orange juice; Anne had seconds, then we put the top down and continued along.

I voted in person on Tuesday. Despite the news reports about the horrors of voting in Florida, all true by the way, the hopelessly long line leading to the South Puffin voting booths had (wait for it) three people waiting. It really did take longer to read the 8-page ballot than it did to get to the booth and that despite studying up on it ahead of time.

I had to show my photo identification (my driver license) to get in the door so I wondered, aloud, why Florida had given me a voter ID card. No one at the polls knew because they weren’t accepting that card. 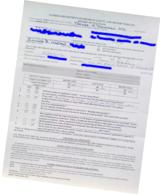 Regular readers may recall that I had cataracts sucked out of my eyes a couple of months ago. The end result is that I have a really neat form from my ophthalmologist certifying me. OK, certifying that my vision is adequate to UNcheck the CORRECTIVE LENSES REQUIRED box on my Florida driver license.

None of the 184,237 people ever answered the phone at Florida DMV when I called, so I eventually tried the county driver license office to find out what I need to bring to my get my license changed. I need to bring a lot.

The state website shows that Florida law requires one to bring “identification and proof of residense (sic) documents” for a new license but doesn’t make clear if that applies to changing the vision requirements as I need. A very nice lady in the Marathon office told me that, yes, I need a:

1. Valid United States Passport
2. Social Security Card or any 1099
3. TWO Proofs of Residential Address, such as

The voter registration card is your ticket to a driver license, the document you need to … vote. Plus your existing driver license that they collected all this stuff for in the first place.

Of course, if I simply renew my driver license online, the state doesn’t require any ID.