In just the Inland Empire of California, in the Mississippi Delta, in Detroit City, in suburban Phoenix, plus the major metropoli of both North and South Puffin, there may be a million people without commercial health insurance or Medicare or Medicaid. Mr. Obama says his signature health care law will extend coverage to more than 300,000 people by 2014 in that one region of California alone.

Perhaps, but coverage may not translate into care: local health experts doubt there will be enough doctors to meet any of those areas’ needs. There simply are not enough docs even now.

THURSDAY, TWO WEEKS AGO
I had to wear comfortable, loose fitting clothes two weeks ago today (what, they don’t supply a johnny?) including a “button down shirt.” I wondered if they wanted one of my pinpoint oxfords or if poplin will be OK? They really meant a shirt with buttons, instead of one that pulls on and off over the head.

My cataracts have been growing for 3-4 years which is not enough for most insurance companies (many demand that vision diminishes to 20:40 corrected before permitting surgery) but mine said, “Just do it!” 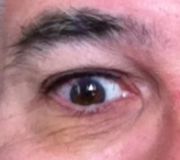 We got to the eye surgery center half an hour early only to find that the surgeon was running half an hour late. The IV Tech had trouble with my general furriness because he didn’t want me to have a Brozilian when he pulled the tape back off. I remember starting to roll out toward the procedure room and absolutely nothing from then to getting ready to be dropped at the curb. And it put my internal clock off so I have no idea of the elapsed time.

I felt like a tipsy old man when the put me in a wheelchair to wheel me out.

I was quite pleased to have things to hold on to for an hour or two after we left there. I napped part of the ride home.

FRIDAY
I said “you saw me but I didn’t see you” to the doc this morning but he told me I did see him and even asked a few questions.

He said surgery was routine.

Really good drugs: he could have said I cried like a baby and I wouldn’t know.

My white balance is back! It is amazing to see the difference in colors. Ditto the brightness. It may be about 4-6 weeks before the eye actually settles down to a steady focus.

Dr. Dowhan told me I can do my toe touches, tie my shoes, do dishes, anything that doesn’t involve lifting more than 25 pounds. He also figures the NSAID I take will have a synergistic effect with the steroid eye drops I’m using for a week.

That 25-pound restriction made me fear that I would need someone (else) to stack the winter supply when they do come in. And to pull the mower deck. And put up the storm windows. And so on. The Lumber yard finally got a shipment of pellets the day before my procedure and I arranged delivery for last Friday. Coincidentally, our son was here! Now I just need someone to Huck Finn the mower deck off the tractor and put it away.

SATURDAY
My eye was a little sore this morning, in the “eyelash caught under the lid” sense which the doc’s office told me to expect. The refractive error seems to keep changing ever so slightly each day.

TODAY
I have my second surgery this afternoon, opening my left eye to enormous possibilities, just two weeks after Dr. Dowhan had done the same to my right.

I’m fortunate. Some of the great eye centers of the country are within a day’s drive so I could have gone to Wills or Hopkins or even flown to Bascom Palmer in Miami without a second thought. I chose Thomas Dowhan here Vermont because he has as good a reputation as some of the other docs and because he passed Anne’s sniff test. Not only that, he could fit me in on my schedule.

Still, I couldn’t do it at my local hospital of choice because they had no openings until late November. I drove to an eye center an hour south of here.

Good that I got my eye patches this year.

The Association of American Medical Colleges forecasts that we’ll have a nationwide shortfall of 62,900 doctors (not patients, 62,900 doctors) in 2015. That number will more than double in just a dozen years, as we baby boomers and the 30 million newly insured drive demand for care ever higher.

“People will still get care,” Dr. Dowhan told me, “but the process gets slower and laborious and crankier.”

Federal Medicaid guidelines call for 60 – 80 primary care doctors per 100,000 residents in any region plus 85 – 105 specialists. The two counties in the Northwest corner of Vermont have 23 primary care docs associated with the one hospital and 67 specialists for about 56,000 residents. We’re on target today for specialists but we should already have 20 more primary care providers. And what do we do next year and the year after as our population rises? And today’s doctors age out?

Obamacare makes all the metrics worse, from access to level of care to cost. That’s the story of this administration.

Even blind in one eye and can’t see with the other, we should all see that.