All is well on the island we can drive to but the beautiful beach is in need of some flotsam removal (including more than a few flip flops — no flares, though). 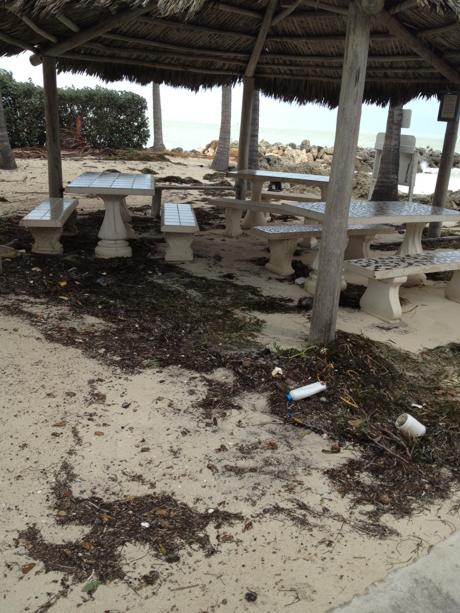 Early Saturday afternoon, the local newspaper there asked Facebook friends to tell their “storm prep and anxiety stories.” Stacie Kidwell wrote, “Filled the car with gas, but it was empty anyway.” That was the right attitude. About half the people cleaned their houses, did laundry, and hung out on Facebook. And Harpoon Harry’s in Key West did a brisk Sunday breakfast business.

Officials: “Now it’s too late to leave the Keys.” That was Sunday morning.

Tens of thousands of South Floridians (more than 32,000 in Miami-Dade County, 23,000 in Broward, and 25,000 in Palm Beach) remained without power yesterday afternoon as sporadic wind gusts and rain continue from Isaac. All Florida Power & Light customers. FPL has been working overtime to “harden” the infrastructure against hurricane damage so I don’t understand how a tropical storm does that to them.

We didn’t lose power even for a minute.  We’re on the Florida Keys Electric Co-op, not FPL.

Folks will gather at the beach this morning at 9 a.m. to clean the place up. If you’re around, bring a shovel or a wheelbarrow or a rake or just a strong back and a weak mind. I’m in North Puffin so you can tell everybody that you are me.

1 thought on “Tuesday Torn: An Inch of Debris”