Monroe County’s part in the great Florida Voter Purge of 2012 has finished. “We do have a clear understanding of the National Voter Registration Act and we have to conform to it,” Elections Supervisor Harry L. Sawyer, Jr., said. “We are not going to break the law even if the governor thinks we should.”

Florida officials (except Mr. Sawyer, apparently) want to compare thousands of names from the state DMV’s non-citizen roster against the Homeland Security immigration database. Federal officials refused. It’s a simple premise. If you are not a citizen of Florida, you can’t vote in a Florida election; if you’re not a citizen of these United States, you can’t vote in any election here. Not one. Period.

“We cant let the federal government delay our efforts to uphold the integrity of Florida elections any longer,” Florida Secretary of State Ken Detzner said.

To Purge or Not to Purge
The U.S. Department of Justice in the person of Assistant U.S. Attorney General Thomas E. Perez ordered the state to stop the purge because it could violate federal voting laws.

It is indeed true that elections supervisors like Mr. Sawyer have delayed cleaning their checklists until we got too close to a national election. The National Voter Registration Act bans checklist decontamination within 90 days of a federal election; this year, the primary election on August 16 stops the state from purging the rolls after May 16. That ought not stop us from identifying the non-citizens on our voter lists. Or from purging the non-citizens for the general election which does not occur until November 8.

Big Brother knows who you are
I must have been living under a rock because I didn’t realize that the U.S. Department of Homeland Security knows who is in this country illegally. That department operates the “Systematic Alien Verification for Entitlements” Program, a database known as SAVE, which contains citizenship information on about a gazillion people. Homeland Security. And they have them listed in a special phonebook that is incompatible with all the state DMV databases.

Let me repeat that with emphasis in case anyone missed it. The U.S. Department of Homeland Security knows who is in this country illegally. And they don’t seem willing to do much about it.

“The number of noncitizens who are on the rolls or appear to have cast unlawful ballots grows by the day. And theres no evidence yet that any lawful voter has been kicked off the rolls,” the Miami Herald reported.

Suppression or Fraud?
The ACLU has accused Florida of “voter suppression.” The Monroe County Tea Party has accused the Obamanation of abetting “voter fraud,” mostly because Homeland Security knows who is in this country illegally and doesn’t seem willing to do much about it.

I don’t know why it’s so tough to prove that a non-citizen actually cast an illegal ballot.

Oh. That’s right. The Feds won’t tell the state who might be illegally in the country which means there’s a whole lot less proof of suppression and a whole lot more appearance of fraud.

No matter whether you fall on the illegal alien or “undocumented guest worker” side of the argument, the government has become harder and harder to trust. 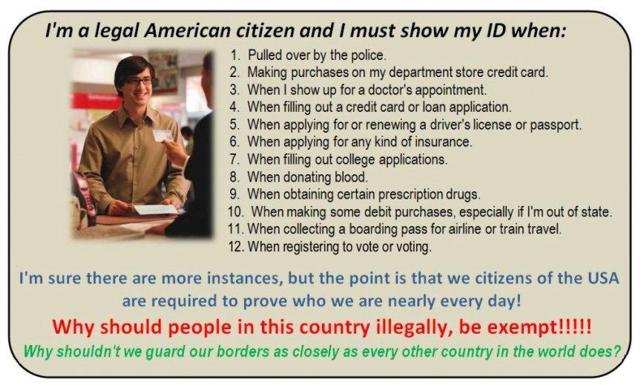 And that, boys and girls, is why Arizona and other states (except Vermont) figure they need to do in-person immigration status checks. And why Florida needs to purge its voter checklists.

4 thoughts on “Here We Come, Purged or Not”