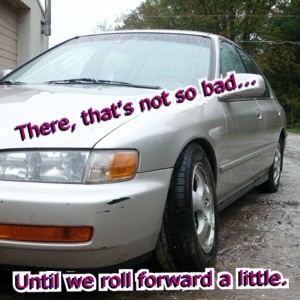 That doesn’t look so bad, now, does it?

The weather was generally crappy (that’s a highly scientific, meteorological term) over the weekend. Drizzly. Gray. Cold. Dank. I couldn’t work on the porch.

Rufus says I probably could have; in fact, yesterday I did see two guys on ladders huddled under a waving plastic tarp trying to work on their porch, but there are limits. Nonetheless, I decided to do some work for a client instead. Good day to be in someone else’s heated house or office.

Drove Anne’s car in to town. Forgot my keys to the client’s office, a fact I discovered when I got there so I drove on to pick Anne up at a friend’s house. She was showing off her new shorty, fuschia, PTB cast.

My plan was to head back to North Puffin, drop herself off, start the pellet stove for her, and head back to St Albans.

Our mechanic says I hit a pothole or a rock on Church Road.

I don’t think I’ve ever had a lower ball joint shear off. BANG! It is loud and bumpy.

I thought I had hit a pothole and blown a tire. The car bucked, bounced down by the nose, but it skidded in pretty much a straight line. That was a small surprise, considering that the left wheel was pointed about due south and the right one about northwest. I was probably going only about 35 mph or so.

The City Police Department patrols the Town and a City cop was eastbound on that road, about 4-5 car lengths from me when it broke. He passed, gaping, and hooked a U-ie to come up behind me.

I called AAA. They dispatched Stone’s Texaco from East Fairfield rather than the local guys because the local guys never answer their phone. The Stone’s driver turned out to be Mr. Stone hisownself. Back in the day, he drove and sponsored a race car at Catamount Stadium and some of the other paved tracks around. Got out when it got to expensive.

It took him a while to get to me because he was already on a call at the other end of the county. He must have really booked to get to the Bay in under half an hour.

He took one look and turned around to drag the car on tail first. Wise move since it did pretty much no more damage. We took it to our regular mechanic where I grabbed a floor jack and we sort of gentled it off the flatbed. Coast it down until the wheel jammed against the fender. Jack up. Kick the wheel assembly back to sort of straight. Let it down to coast some more. Rinse. Repeat. The car needed only four iterations to slide off the truck. 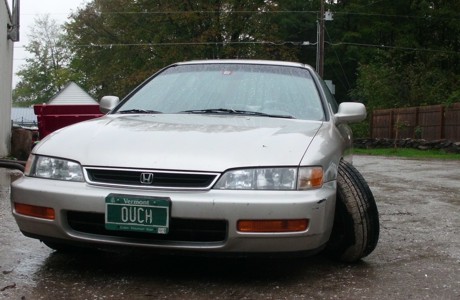 Mr. Stone dropped me off at the top of the friend’s street because I wouldn’t let him try to wangle his flatbed down her narrow dirt road. It’s not more than a 1/4 mile walk.Number 1 Daughter picked us up there with the grandpuppies in tow. Lazarus is the smaller of the two, a Bernese Mountain Dog. Yogee is a Newfoundland Retriever who still doesn’t know how big he is. She calls him her special needs child. I told her she could step up in brain power to a Goldie next.The kids say having the car incident now was a good thing. See, normally Anne breaks this stuff when I’m in South Puffin.

Now I have to go do something fun like clean out a stove pipe. 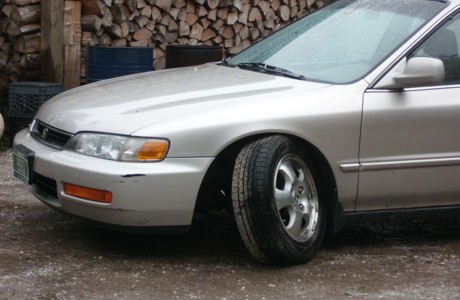