Some other dood did it.

The SODDI defense, sometimes including “Plan B,” comes up in a criminal trial when there is no question that a murder, assault, or theft happened, but somebody else was in the room as a convenient fall guy. “Black guy, big head” actor Steve Harris liked to say in the television legal drama The Practice. The Other Dude can often remain unnamed, just a wraith who creates reasonable doubt. The real Plan B is invoked when the Other Dude gets a name. 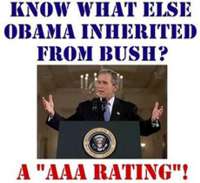 Republicans in Congress and on the street, of course, blame President Obama for all of the nation’s problems. “Hold the line,” Jim DeMint told Speaker John Boehner.Some other dood did it.

One of Rufus’ good friends, the very liberal born-again Zoroastrian musician Tom Minor, posted a Youtube video showing “How The Bush Tax Cuts Blew Up The Deficit And Debt.” It has easy to understand pictures, he wrote, “for all your friends who try and sell the BS that this debt is Obama’s fault.”

Some other dood did it.

If George Steinbrenner were still alive, how long do you think Barack Obama would last as the manager for the hated (in Vermont, at least) New York Yankees? I reckon he’d get tired of keeping power hitters Reid, McConnell, Inouye, Durbin, and Kyl, Boehner, Cantor, Pelosi, McCarthy, and Hoyer on the payroll when they couldn’t do anything but fumble.

Some other dood did it doesn’t work on the diamond.

Howard, and Jim, and Tom all missed the boat. They should have used the Shaggy Defense.

Reggae artist Shaggy’s number one hit song It Wasn’t Me portrays a man who asks his friend Shaggy what to do after his girlfriend caught him with another woman. Shaggy’s advice is to deny everything. Say “It wasn’t me,” despite all evidence to the contrary.

The Shaggy Defense described singer-songwriter, arranger, performer and record producer R. Kelly’s position when charged with child pornography after cops found a video of Mr. Kelly having sex with an underage girl. “You say that was me on camera, butt naked, face hanging out, banging on the kitchen floor? Nope. Wasn’t me.”

Probably wouldn’t keep the manager or the players on the roster in the real world, though.

Citing the ongoing deficits and the unlikelihood that the current crop of politicians would ever solve them, Standard and Poor’s downgraded the United States debt from AAA to AA+ yesterday. It is the first debt downgrade in U.S. history.

I know. S&P must be the Other Dood.