For the record, I adore Nancy’s balls. 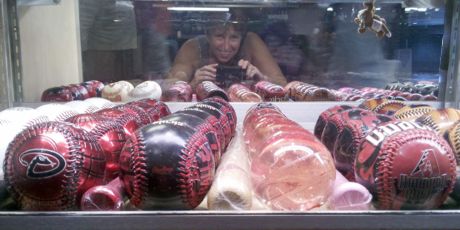 Also for the record, it might have seemed strange to be on a date with Nancy and Don.

Both teams went through five pitchers.

Of course, I was texting Anne at the same time Nancy was texting Don. I was trying to try to figure out if the teams were National League or American League. We probably should have asked Don. And Nancy had been texting me while she and Don watched that Spring training game. Come to think of it, both girls were texting me from the Sprint Cup Race; I don’t know if either of them texted Don that day.

Nancy asked me right after the ballgame if I minded that we were sitting there at the game while she rattled back and forth with the guy who wasn’t there.

I’ve learned that reaching out and touching each other — those little keep alive messages — are the most important part of our friendship.

“But she’s supposed to be focused on you…”

The fact that she has room to share a funny story or upload a picture of her balls doesn’t detract a bit from what we, Nancy and I, have together. It adds to what we all have in our lives.

[Editors Note: gekko and I shared the four-part polylocution that lead up to these afterposts. Please visit The Poly Posts for the entire series and for other resources.]