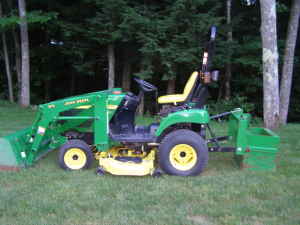 I figure I can drive anything with wheels. The Great White Fleet right now includes a (white) pickup and an 18′ flatbed trailer, the (topless) (white) car, a more traditional (white) sedan, and a (mostly green) John Deere 2210 diesel tractor with a front end loader, mid-mount mower deck, and a 3-point snowblower. The bucket, mower, and blower are all 54″ which is a convenient width. I also have a five-foot brush hog and a five-foot swivel blade, but that’s another story. We’ve sold the race cars but in years past, I have manhandled a twin-stick Mack, lugged barrels and boats with a twin-boom fork, and shepherded race cars with and without fenders. Rufus is annoyed that I can tuck a trailer into a blind alley with 6 inches of clearance.

I’m still getting the hang of filling the tractor bucket, though. Dumping it is easy peasy but filling it while leaving nothing on the ground is still a trick.

I’ve had a chance to practice this past week.

Schools across the county had all cancelled Wednesday’s sessions before the 6 p.m. newscasts Tuesday evening as the biggest snowstorm of the season rollicked across Southern Vermont on its way to North Puffin. I had cleaned up all the open spaces just before dark so the drive was as ready as it could be. In fact, I even opened a new path to the woodshed as well.

I don’t have brine so I have to plow the old fashioned way: out in the elements, sitting high on my tractor, pushing and sometimes lifting the snow with the front end loader bucket.

Did I mention that I haz a tractor? 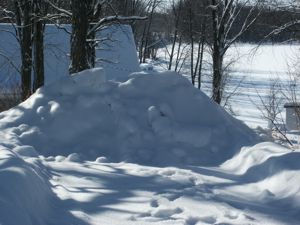 “Plowing” with a bucket means pushing the snow ahead of the tractor with the bucket until you either (a) fill the bucket or (b) get to the end of the driveway. In either case, the technique at the end of the run is to lift the overflowing bucket of snow high onto a mountain of snow somewhere out of the way and deposit same. Lather. Rinse. Repeat.

Did you remember my tractor has a snowblower?

Unfortunately, that snowblower is buried at the very back of the garage, behind all the materials for the new porch construction that were supposed to be out of the way (meaning back where they belong) by Fall.

I figured then it would be OK. After all, we don’t get many big snow falls and I didn’t blow any snow at all last year. Right? Right.

Ten inches of snow by the time I plowed the third time around 5 p.m on Wednesday. I measured another three inches at bedtime and it was still snowing lightly, small, sparkly flakes. The land is really quite pretty. Weather radar shows the majority of the storm had passed us by then.

And it could have been worse. 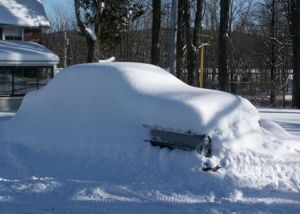 My running total, with the Wednesday night-Thursday morning’s four inches, was just 14 inches total but the undisturbed, undrifted roof of the Mercedes told the real story on the yardstick. 16 inches. Shoveled the walk. Dragged a shovel’s width out from the south door of the porch portico so that door can open if need be. I have plowed and plowed and plowed and plowed. I moved all the new snow out of the driveway and then cleaned up the edges. I also opened up the walkway we use to get to the woodshed but still needed to plow up to the barn.

On Friday, I plowed the new snow, neatened up everywhere, opened up the woodshed again and the dooryard and made a path to the barn. Even ran the Camaro for a while to circulate the juices and charge the battery. On Saturday, I made another little path so we could get to the pile of locust since that particular wood was running low in the woodshed. I like it for overnight burns.

And then it started snowing again. Overnight.

Recall that plowing really means pushing and lifting. That’s easy when the snow is two or three inches deep because it takes most of the driveway to fill the bucket. Plow down, lift, dump. Plow back, lift, dump. Much more than that couple-three inches, though, and the lifting/dumping cycle happens with greater frequency.

27 inches of snow is more than enough. And it looks like it’s about to start. Again.

And that was kind of the point.

I can drive anything with wheels but Anne has never had much reason to. Oh, she drives pickup trucks and station wagons and garden tractors but she isn’t very good at backing up a trailer and had no “heavy equipment” experience at all.

It did snow in December and January while I was out of state. I came back here to neat piles of snow where there should be piles and no snow where there shouldn’t. The sight lines at the road were clear. And there was plenty of room for the next storm and the next. She had mastered the plow/lift/dump cycle beautifully and she did it on her own.