And why do we pay so much?

About a lifetime ago, I paid income taxes to both New York and Vermont. My job was with a manufacturer on the left side of the pond but New York had those baby-puke colored license plates at the time and I really didn’t want to live there; we moved to the home of the green plates instead.

I didn’t much like paying income taxes to New York.

The NY state legislature finally passed the 2004 budget. That’s not funny but it is nearly true. The NY state legislature finally passed the current 2010-2011 budget last week, 125 days late. The press spin department called it a “fiscally responsible budget” with higher spending and an additional $4 billion in new taxes. New York will spend $136 billion they collect from you and you and you. And me, since some of the counted revenues come from Federal coffers. It is the fourth latest budget in New York State history.

Read that again. It is one of the latest budgets in New York State history.

“It takes more than 20 months to repair more than 40 years worth of damage,” State senator John Simpson (D-somewhere-in-NY-but-not-for-long) said as he harped on how much worse things were under the former Republicans’ rule. 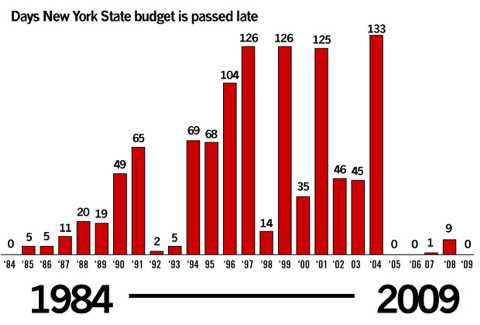 The pattern shows the legislature fritters when they aren’t afraid of the voters; they sort of buckle down when the voters are watching.

Everybody has an excuse. Whiners.

Incumbents called it the “most responsible budget” in a couple of decades.

What are they, nuts?

We elect peeps for pretty much one reason: to spend our money on the things we want them to spend it on. We don’t elect them to fritter away their time or that money.

Former New York City Mayor Ed Koch got it right about members of his Legislature: “The good ones aren’t good enough and the bad ones are evil,” he said.

2 thoughts on “What Do We Pay Them For?”