This is my personal health care story. Sadly, there is scant pathos, little conflict, and no resolution.

Although I moved to South Puffin more than a decade ago, I have maintained my medical ties to North Puffin and even to Canada because it takes a lot of effort to break in a new doctor.

I’m an engineer, so I usually know a lot more (and can hash out even more) than a doc figures on. I’m also very much a minimalist, meaning I will opt in for a procedure only if it fits my own idea of “value added,” not if it is merely “doctor’s orders.”

All that does not make me the best patient.

Anyway, we met “Dr. Bob” when we first moved to North Puffin. We were a young family then and he was about our age. We’ve all kind of grown up together. His kids and ours knew each other in school. SWMBO married his daughter. Mrs. Dr. Bob and I have done some artsy stuff. Dr. Bob acts in the hospital’s bi-annual Cardiac Capers. And, with the exception of the time I cleaved my finger with the chainsaw and the other time SWMBO broke her leg, Dr. Bob has treated pretty much everything that ailed us. He understand what it takes to treat me. He gets it.

Primary care is an onging conversation, not a brisk look at a chart and tap on the knee.

The connection is even deeper. Just before we bought our house, we were driving around, seriously lost, in North Puffin. We stopped to ask directions of an older gent walking along the road and told him we were house hunting. Mr. Smith told us where we were. He told us a bit about the area. He told us he had lived there all his life so far. He was 96. He didn’t tell us that his lovely, brick, farmhouse with barn was for sale.

First, check the insurance.
Then, do no harm.

A couple of months later, we bought a different lovely, brick, farmhouse with barn on the lake and a fellow I worked with bought Mr. Smith’s home. Then he sold the Smith house to Dr. Bob and Mrs. Dr. Bob.

Getting back to health care, Dr. Bob is a couple of years older than I and he has retired. Ah hah! I thought. I can transfer my primary care (what we used to call the G.P.) down here.

Side story. Dr. Bob told me my increasing snifflinesss [<==technical medical term] is an allergy and I should find a specialist. I talked to a nurse at a sprawling medical practice in Vermont about an hour from North Puffin. I’m looking for someone to do allergy testing and they have three. The nurse told me two of the docs there are Peds only. The third allergist there as well as the one doc in Puffin Center don’t have the greatest reps. In fact, Dr. Bob won’t send patients to the one allergist in Puffin Center.
I asked a friend if she knows anything about an allergist in South Puffin or even the one in Key West who also has offices in Palmetto Bay and South Miami. Turns out the Marathon guy is the doc who admitted he sexually battered a patient in Illinois and then got sued by an employee he groped and pointed a handgun at. He also does weight-loss workshops. That’s worse than the Puffin Center guy.

Laura told me (remember Laura?) that their new medical director is an ER Specialist at our critical care hospital in Puffin Center but he’s the only doc listed on staff at the Federally Qualified (rural) Health Center Dr. Bob built. They have a nurse practitioner, two physican assistants, and a wellness counselor. 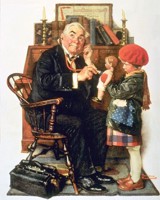 Meanwhile, down here we find the 57-year old who diagnosed that I had either flu or pneumonia a few years ago. He treated for both. Either his treatment or tincture of time worked but it didn’t leave me feeling particularly confident. There are four other family medicine docs, two men and two women. Three are over 60 and the one with the most recommendations from neighbors is 69. That’s a year older than Dr. Bob. The youngest is a 54-year old. She’s not taking new patients.

So my choices seem to come down to one of a bunch of physician’s assistants or a doc who will likely retire tomorrow.

I don’t care if I have the pro from Dover for day-to-day stuff but I do care that I get the same person. Primary care is an onging conversation, not a brisk look at a chart and tap on the knee.

Is it too much to ask to see an actual doctor, let alone one young enough that I might not have to do this again for a couple of decades? I don’t mind training a newbie too much if they seem to be in it for the long haul.

Our dentist lives and works in Quebec. He was about 12, I think, when he bought the practice there, so I figure I can keep him at least as long as I can keep what’s left of my teeth.

5 thoughts on “Doctoring the New Millennium”