I live in the middle of the Florida Keys where I have flood insurance and windstorm insurance as separate policies from my “traditional” homeowner’s insurance.

The premiums went up this year.

FEMA runs the National Flood Insurance Program which “aims to reduce the impact of flooding on private and public structures. It does so by providing affordable insurance to property owners…” They have lousy aim.
The state-run Citizens Property Insurance Corp provides windstorm insurance protection to Florida policyholders. The “financial responsibilities [imposed by the Florida law] drive Citizens’ commitment to quality customer service and rigorously sound financial management.” Their aim is much better since premiums have skyrocketed. They have 459,797 windstorm policies in Florida overall and 17,264 of the 22,663 wind policies here in the Keys.

When I realized how much my premiums went up and how much my Social Security didn’t, I got to wondering why. After all, these are all government programs, driven to customer service and affordability. And we know the government ties everything to the Consumer Price Index, right? 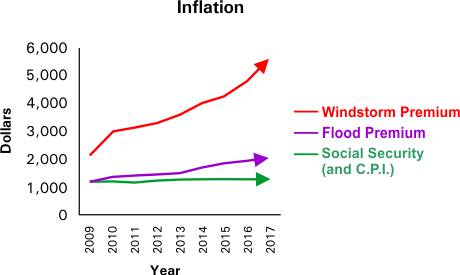 The Bureau of Labor Statistics “is the principal Federal agency responsible for measuring labor market activity, working conditions, and price changes in the economy.” They collect and analyze that data and then tell us about it. We the Overtaxed People as well as the U.S. Congress, other Federal agencies, and State and local governments depend on BLS data every day. The Consumer Price Index may be their best known number among older Americans. Current Employment Statistics may be the most quoted in the press. They have more.

The official BLS inflation calculator shows there has been 14% change in the CPI since 2009.

The liberal ideal is “Medicare for all” because they say it will drive costs down, but if FEMA and Citizens are examples of efficient, affordable government programs, we should be very, very afraid of all of these “ideal” liberal programs.