And we have proof. Swimming pools are full of piss but rarely vinegar.

Olympic swimmers do it. Babies do it. Elderly great-grandmothers do it. A 2012 U.S. study verified that nearly one-fifth of Americans do it and an American Chemical Society study performed at the University of Alberta confirms that everybody pees in the pool.

At the same time, our beach club owners are bumping heads over whether to install an outhouse. It is not a trivial question. There is a real concern among beachgoers about people peeing in the ocean but our beach is a nice sandy lot with neither electricity nor sewer. Planning for accessibility, the engineering and construction costs, a sewer hookup, and running water and electricity are all significant issues.

Does it really matter if you pee in the ocean? Or your pool?

The environmental toxicology experts at the University of Alberta found a way to measure the concentration of urine in pools thanks to our lurve of sugary snacks, particularly sugary snacks at the seashore.

Acesulfame potassium, better known as “Ace-K,” is an artificial sweetener now commonly found in the much of what we eat and drink.

Whether your soda pop has sucralose or aspartame the chances are good it also has ace-K which is around 200 times sweeter than sugar. Other foods that contain acesulfame potassium include fruit juices, non-carbonated beverages, and alcoholic beverages, baked goods, cereals, chewing gum, condiments, dairy products, desserts, ice cream, jam, jelly and marmalade, marinades, salad dressings and sauces, tabletop sweeteners, toothpaste and mouthwash, and even yogurt and other milk products.

Acesulfame K isn’t broken down or stored in the body. Instead, it’s absorbed into your system and then passed unchanged in your urine.

The researchers determined how much of the water was urine simply by measuring the concentration of Ace-K in the water.

So how much urine is in your pool? Or my beach?

All of the pools and hot tubs the team tested contained urine. The study found that typical backyard pools contain about 20 gallons each.

Your kitchen trash can holds about 7 gallons. Imagine if one of your (very productive) friends filled it three times and dumped it in the pool!

We all know that urine is sterile but the other compounds we pass, including urea, ammonia, and creatinine, become dangerous when mixed with the pool chemicals. They can lead to eye and respiratory irritation and even asthma in those exposed long enough.

It’s worse in the ocean where they can turn the water green. 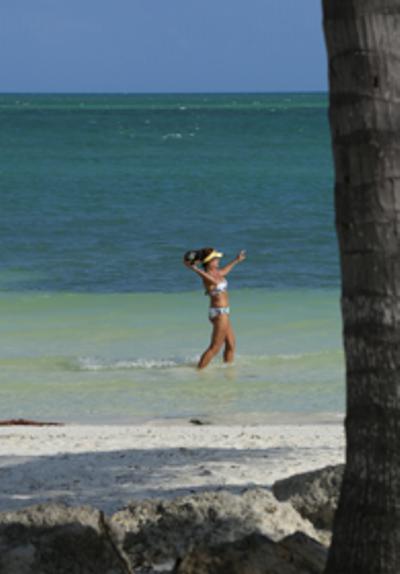