I’ve made a new friend who was kind enough to let me couch surf and to show me the sights. And had a number of firsts.

In our prior episode, after a short night’s sleep in Albuquerque, I was up and off to Grants, NM.

I visited New Mexico’s Land of Fire and Ice and found the Sands Motel off Route 66 in Grants, New Mexico, but didn’t have to stay there. I also drove past the Ice Cave and told the story of my great-grandfather and my grandmother cutting ice on Westtown Lake in wintertime. They stored it in our 10-sided ice house. 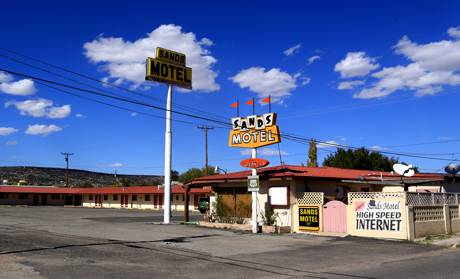 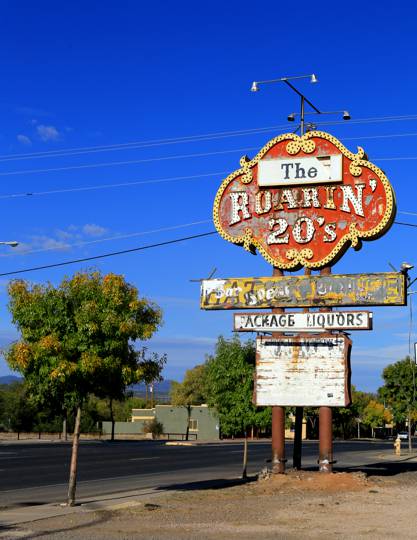 Grants is on the Trails of the Ancients Byway, one of the designated New Mexico Scenic Byways, and right on old 66. The city began life as a railroad camp when the Canadian Grant brothers built a section of the Great Atlantic and Pacific Railroad there. At night you can fall asleep to the lullaby of freight trains rolling through. It has also been the “carrot capital” of the United States, was an airway beacon, and the uranium capitol after Paddy Martinez discovered the ore near Haystack Mesa; the mining boom lasted until the 1980s.

I saw my first saguaro of this trip. 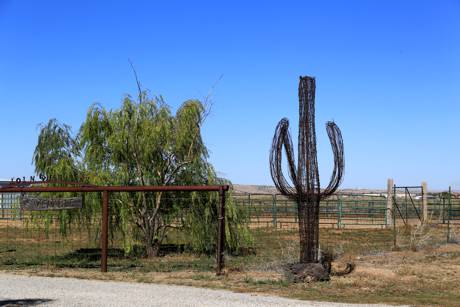 The beacon and FSS building on the airport is now the Western New Mexico Aviation Heritage Museum. It includes two 1929 historic structures, the lighted 51-foot airway beacon tower and a small building with one of the two original generators, plus the concrete arrow which helped daytime aviators follow the direction to the next beacon. The renovated 1953 Flight Service Station is the main exhibit hall. 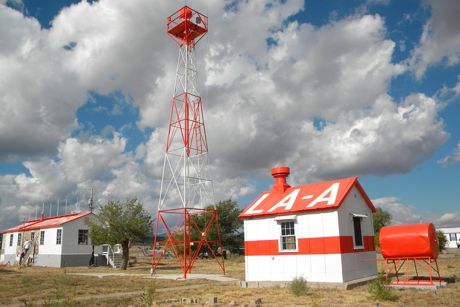 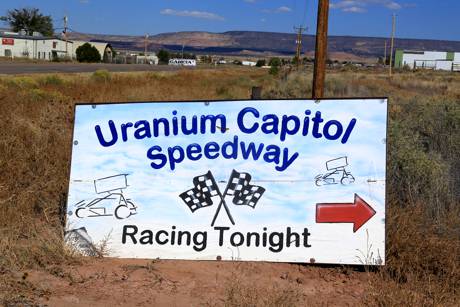 Then the white truck made its first trip across the Continental Divide. It was, in a way, an anti-climax. The truck didn’t seem to notice the thinning air and my gas mileage stayed about the same as it was at 6,000 feet. And 4,000.

Low-octane fuel — rated 85 or 86 as opposed to the 87 for regular gasoline — is common in the Rocky Mountain states, said General Motors fuel specialist Bill Studzinski. The practice goes back to the days of carbureted engines, when lower octane helped vehicles run smoothly at altitude. The electronic engine controls that have replaced carburetors make the lower octane unnecessary and potentially harmful. EPA states that these “newer vehicles can adjust the spark timing to reduce knock, but engine power and fuel economy will still suffer.” 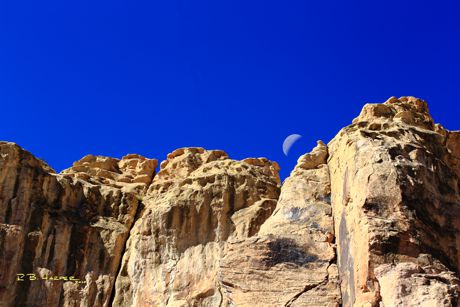 El Morro National Monument sits on an ancient east-west trail in western New Mexico. Its primary attractions are the graffiti-laced sandstone promontory with a pool of water at its base and the remains of a mesa-top pueblo top the promontory where some 1,500 people lived in an 875 room pueblo from about 1275-1350 AD. Travelers left signatures, names, dates, and stories of their quests. The conquistadors called it The Headland (El Morro). The Zuni call it “A’ts’ina” (place of writings on the rock). Americans called it Inscription Rock.

E. Pen Long of Baltimore came through El Morro with the Beale Expedition of 1859 bringing 25 camels in a short-lived Army experiment. He signed with this flowing, perfect, script. And one T. Post signed over top of that in 1872. We haven’t chased down how he’s related to my friend Bob. 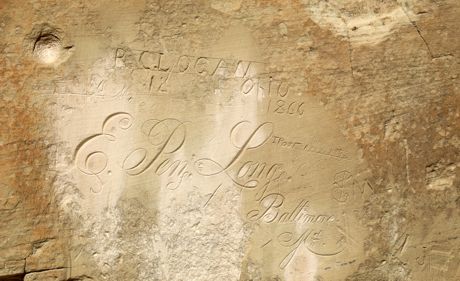 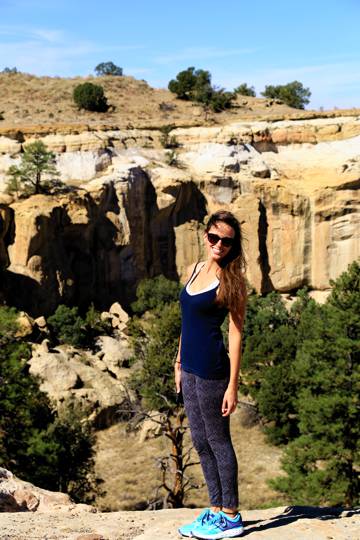 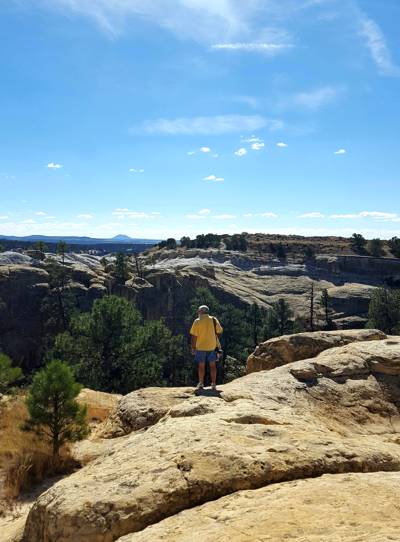 We also stopped at the Ancient Way Cafe where I had a Buffalo burger for the first time with homemade potato salad served on a split top bun with leaf lettuce, tomato, onion, pickle, cheddar and a real milkshake. They also let me plug in my truck.

I’m carrying a 12V/110V freezer on this trip so I plug in to run the compressor and recharge the house batteries whenever I can.

We walked across El Malpais lava flows to get to the Bat Cave. The youngest flow is McCarty’s Flow, some 3,000 years old on the east side of the monument. The Chain of Craters cinders come in at 600-700,000 years. Mount Taylor and its flows, up to the northeast of Grants, are 1.5-3.3 million years old. During the summer, tens of thousands of Brazilian free-tailed bats use Bat Cave, a lava “tube,” as their day roost. They emerge for their nightly feedings. I’m quite pleased to report that I saw no mosquitoes.

My folks “moved” to Gallup, New Mexico, for hurricane season a few years ago. New Mexico rarely has hurricanes, so they were actually escaping the South Puffin weather. My mom wanted to paint “on the Res.” Right on Route 66, the town catered to travelers but now is all Pawn and Trading Post. My folks rented an apartment for several months. 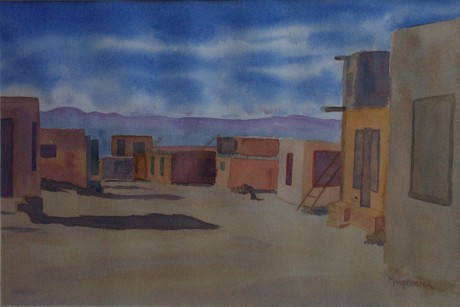 The downtown Gallup Amtrak train station sits right on Highway 66; it is the second busiest station in the state, with more than 16,000 passengers per year. The two-story Mission Revival building was built as one of the Santa Fe railroad hotels in 1918. It is now also the home of the Gallup Cultural Center operated by the Southwest Indian Foundation. 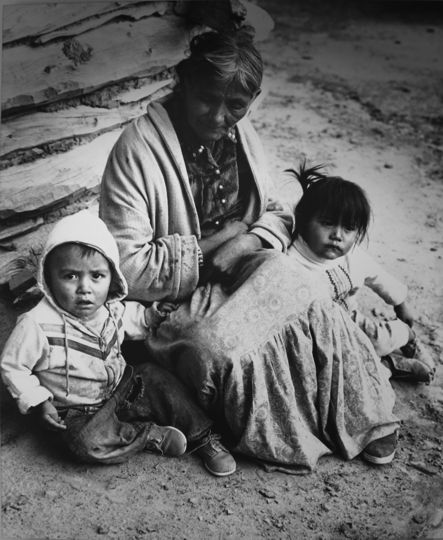 I started my visit through the center’s Storyteller Museum and Gallery to see the exhibits of Kachina dolls, weaving, sandpainting, silversmithing, jewelry, pottery, and other pieces by Acoma, Zuni, Navajo, Hopi, and other artisans. 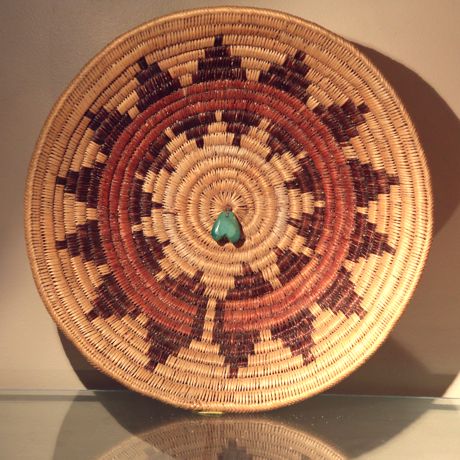 Wayne Wilson was there to show his son the museum. We talked about the Navajo and Hopi Kachina dolls. Wayne explained baskets and the cradleboard story and introduced me to Navajo Beautyway Teachings/Dine’ Bi Hozhoji Beh Na’nitin.

The Navajo Ceremonial or Wedding basket’s step designs are clouds or mountains, Wayne told me, that are reflected in the center. The red ring is a rainbow, and the center represents the sipapu, where the people emerged from the prior world, born through the inner coils of white. As you travel outward on the coils you begin to encounter more and more darkness, struggle and pain but you can climb into the rainbow and prevail. The wedding basket is built around that pathway, adapted from the Navajo creation story.

Wayne’s nephew, Irving Tsotsie, painted this slice of the history of the People. The original hangs in the Storyteller Museum. 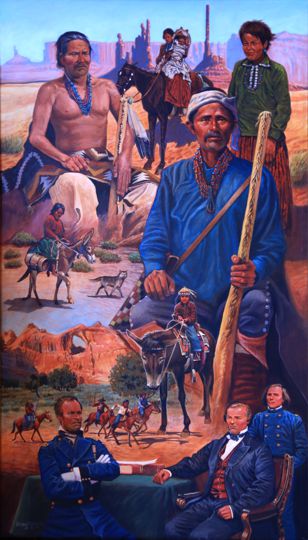 Manuelito was a war chief of the Dine people in the time of the Long Walk; he rallied the People against the United States military. Sadly, he died in 1893 from measles complicated by pneumonia and alcoholism.

I wanted to see where the Legendary Lieutenant worked so I drove to Center of the World, Window Rock, on top of the Defiance Plateau. Also called the Perforated Rock, Tseghshoodzani is part of the Navajo Water Way Ceremony as one of the four places where medicine men take the traditional woven water jugs to get water for the rainfall ceremony. 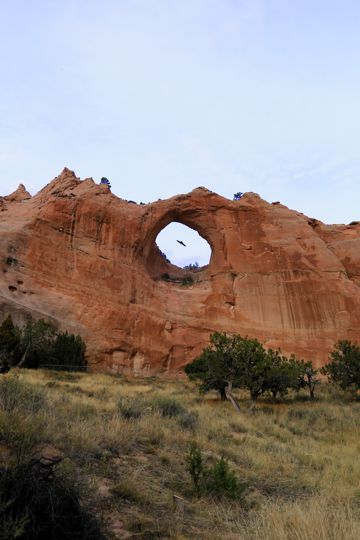 Jim Chee is the other principal detective in Mr. Hillerman’s novels of crime on the Reservation. Chee’s most important (and final) romance is with Bernadette Manuelito, a full-blooded Navajo and also a member of the Tribal Police.

I found NOSHA, Navajo EPA, and Navajo United Way. And I stopped in at the Dispatch and Records Office of the Navajo Nation Police Department. The NNPD is scattered among many trailers at NDOJ; Criminal Investigations was in practically the next trailer. 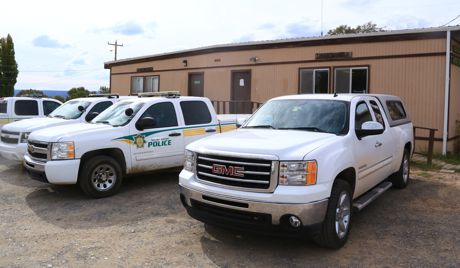 NNPD officers are cross-commissioned with Arizona State Police so the agencies can work together and have arrest powers across the state, Sergeant E. Garcia told me. Currently, there are 210 sworn police officers, 28 criminal investigators, and about an equal number of civilian support staff. Each officer patrols 70-80 square miles of reservation land in seven districts: Chinle, Crownpoint, Dilkon, Kayenta, Shiprock, Tuba City, and Window Rock. The rumor in Window Rock is that all of that office will be consolidated in a new building soon.

The P.D. was very nice. They let me out.

The Zoo is “the only Native American owned-and-operated Zoo in the Country.” It gets over 40,000 visitors each year.

I’ve been chasing golden eagles in North Puffin where sightings are rare indeed (we have some that “fly through” but none that are building homes. Called “Atsashzhiin” in the Navajo language, golden eagle is sacred and important in the Dine culture. The Zoo provides daily care for nine golden eagles as well as about 50 mammals, all identified in English and Navajo with descriptions linking the animals to the culture. 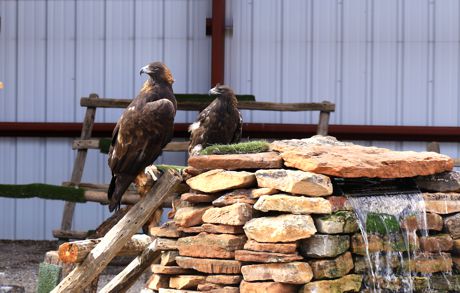 I left the 6,830 foot elevation of Window Rock and drove down down downhill, down past Snowflake and Bear Flat, through the Apache-Sitgreaves National Forest, almost a mile downhill toward Paradise Valley and some days off from traveling.