A large dome of High Pressure still over most of the eastern U.S will again bring warm temps with some record highs today back east. Much colder weather is on the way, though, as a strong cold front is set to sweep across during the next couple days. Here, it is HOLY CRAP IT’S COLD OUT THERE!

It was 52°F and fair when I got up. Today will be sunny and warm up a little to a high near 67 on quite a bit of north gusting as high as 24 mph. It is actually warmer in North Puffin, halfway down the earth from the North Pole.

In Amarillo, today will also be sunny with a high of only 65°F and wind chills between 31 and 41 early thanks to the Cold Front that I passed through yesterday and a 10-15 mph north wind. Tonight is looking clear with a low around 40. I may wear pants again. I know I’m wearing my parka. 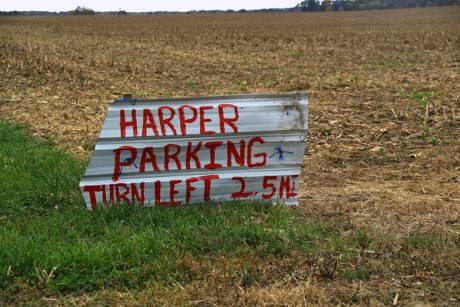 The countywide Covered Bridge Festival is Indiana’s largest festival and is nationally known. Communities throughout Parke County have a wide array of shopping and a variety of food. I hit the edge of it in Northfield, I think, and saw enough cars there for 20-30 THOUSAND people. Forest Ave in Brazil was one long garage sale, too, but not as many people. They  didn’t let me park for free, despite the sign.

Lila Too sent me on mile after mile of gravel roads in Brazil on the way to Main Street. Vermont’s Class 4 roads are better. NJ’s roads are better than the County’s paved back roads.

“Some roads that once served now-abandoned hill farms and settlements are rights-of-way that have been retained by communities as seasonally maintained Class 4 roads or legal trails for recreational use.”

Lila Too also sent me through an old railroad bridge with just 1′ of clearance for my mirrors.

Lila Too calls the state “Misery.”

I’m thinking Garmin may have some work to do.

I saw my first oil derrick of the trip in a cornfield near St Elmo.

And I took Old 66 through Cuba which has the same population as Highgate but in 3 sq. mi. Most folk were at a funeral as I came through. Maybe the prize was just too much. 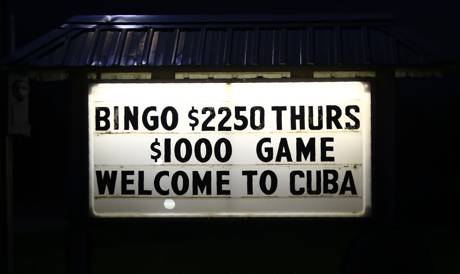 I crossed the Big Muddy and called SWMBO to fid out whether she wanted me to look up her old home out there. “I don’t remember the address.” I went up in the arch, instead. 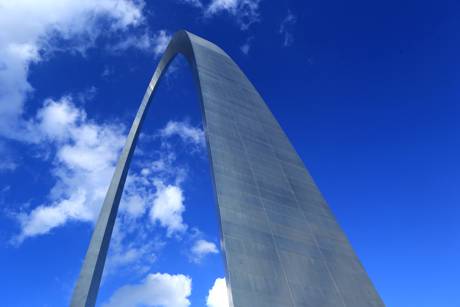 The 50-year old tram cars seat 4-5. A nice family also traveling through adopted me and I rode up and back with them. 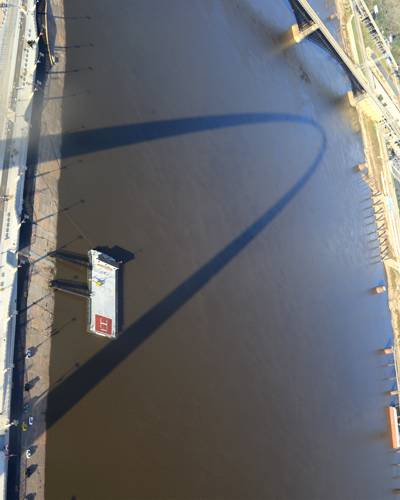 Came through a lot of rain Wednesday as well as an Severe Thunderstorm Warning that called for 60 mph winds, and hail damage to vehicles with continuous cloud-to-ground lightning. It was raining in the Ozarks and raining over Route 66. Had a beautiful sunset over Oklahoma City, though, and quite a light show from afternoon into the evening as lightning just kept coming, one right after another. 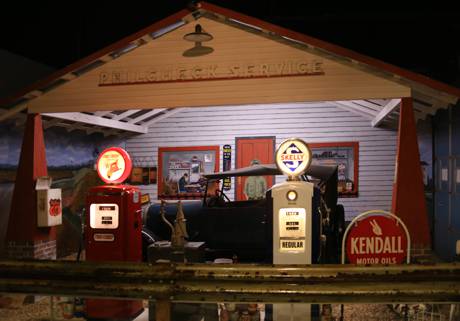 I drove on Route 66, the Mother Road, as much as possible. Pundits say it is “dead” but it is very much Main Street USA.

The rain meant I didn’t make as many stops nor take as many pix as I might have. Still, I managed to capture blue whales and cows, Route 66 board games, salt and pepper shakers, Boots Court air conditioned motel with a radio in every room, and a very odd silver dome. 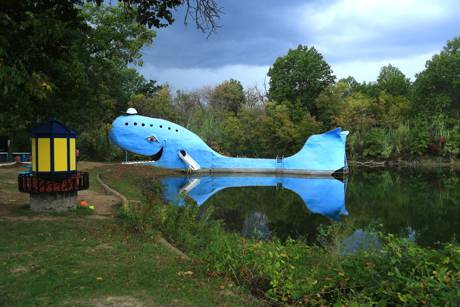 I passed the largest boat dealer I’ve ever seen with acres of inventory. Likewise, the biggest Bass Pro shop. I’m thinking there must be a reason.

The trees along the route are turning, which seems odd since it is 80F and above. They are not very bright. The volunteer at the blue whale asked if I had taken any photos of the trees (I took on tree yesterday). No, I said. I’m from New England.

The foliage I left in Vermont wasn’t close to peak but everything was bright and vibrant there. Even Pennsy is good in comparison to the dull browns.

I tried to visit Sandstone Gardens which you can see from the Interstate. Lila Too took me to Loma Linda which is apparently a Tulsa suburban neighborhood not the golf course it looks like and fortunately not the city in California.

I stayed in the city of Weatherford, OK, overnight and am off to Dead Women Crossing today.