The St. John’s Club in Burlington has about the second best view on Lake Champlain because most members love looking at the lake but think it would be more better perfect if they could see the lake and the Green Mountains instead of the newer mountains in the adjoining state. 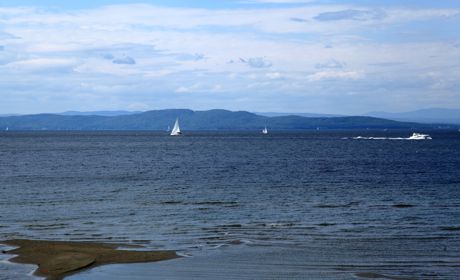 It is indeed one of the great spots to watch the sun set on Lake Champlain and a favored place for weddings and receptions.

Ethan de Seife called the St. John’s Club, a Lakefront Club for the Average Joe and that’s praise indeed. The “social club” was a founded as a men-only laborers’ drinking hall by the Francophone mill workers of the Union St.-Jean-Baptiste about 150 years ago. It has owned its home on the lake since 1964. “Same-sex couples, dancing cheek to cheek, shared the floor with retirees, twenty-somethings, and clients and employees of the Howard Center,” Mr. de Seife wrote. “No single word describes the scene more aptly than ‘unpretentious’.” The club even has Friday karaoke nights, a regular event that welcomes nonmembers.

SWMBO married a couple there Saturday.

One of the guests asked how long she had been doing this. SWMBO counted on her fingers and realized that she’s been a Justice of the Peace for about 18 years; she stands for re-election again this fall.

Vermont’s first governor began his public life as a justice of the peace in Salisbury, Connecticut, before he bought a tract of land along the Onion River in what is now Williston, Vermont.

Today the JP serves as an election official, decides tax appeals, and swears in new voters and may administer other oaths whenever an oath is required. A justice of the peace is a notary public ex officio and may also serve as a magistrate when so commissioned by the Supreme Court. And they can perform marriage ceremonies.

SWMBO lost a close election about a decade ago when eight candidates ended up on the ballot. Fortunately, the governor may fill any vacancy that occurs by resignation, death, or insanity so then-Governor Jim Douglas reappointed her when that did happen.

Most of Vermont was under threat of rain as a frontal boundary approached and brought a pretty good chance of showers for the entire wedding afternoon and through the night. It coalesced into a thin band of rain that sent wind ahead of it and stalled until late that evening. A lightning bolt across the highway woke me about dawn on Sunday but the rain itself had held off until after the reception.

The wind came in early and blew over the arbor. SWMBO caught it. JPs have many mandatory duties.

Kids and grownups, university folk and service people, firemen and contractors, and even a meteorologist, all in ties and long dresses and long pants, as well as the taxi driver in shorts who came in very late attended the festivities.

During the rehearsal, the groom kept asking “Can I kiss her now?”

SWMBO waited until after the readings and a prayer to say to the groom, “Alright, you may now kiss … her hand.”

After the real kiss, the entire wedding party waded out across two sand bars for photos and laughter. Just so you know, I wore the shorts when I arrived to pick up the JP but I also wore my second best blue dress shirt. The bride’s parents invited me to stay.

We love it when a plan comes together.