Sometimes you just can’t plan for nights like this. Another North Puffin tale.

Jazz mesmerized our North Puffin Town Park last night as we continued the 26th year of free outdoor concerts with Jenni Johnson and the Jazz Junketeers.

The forecast called for a pretty good chance of rain across Vermont last evening. That’s a bad thing for an outdoor concert.

I obsessed over the radar yesterday as I do but we got lucky: it was clear and sunny all day. The rain had gotten only as far north as Ticonderoga by 5 p.m. and was pretty well trapped between Route 2 and Route 4 (the central third of Vermont) for the later afternoon and evening. By the time the concert ended, it was still raining in southern New England but the Vermont rain had pushed across New Hampshire into Maine. I figured there was a small chance we’d get a little from the storms coming up the Adirondacks but we didn’t even get that although there is finally some light rain here as I write this.

That should be enough for a great evening but wait! There’s more!

An international entertainer, Jenni has sung jazz, blues, and funk since her own teen days in New York City. She spent the 1980s on musical projects in Houston and Boston including her own Billie Holiday Story. She launched her Jazz Junketeers in 1989 to sing the jazz and blues standards by her favorite African-American artists. Now she remains an active touring artist who has played more of our Summer Sounds concerts — and picked on me more — than any other performer.

During the first set, I spotted Verne Colburn in the audience. Verne was the longtime director of Bellows Free Academy music, an incredible Jazz pianist, and beloved in northwestern Vermont. He turned 80 in April. I popped onto the stage (we’re very informal here in North Puffin) and asked Jenni to throw a song out to him.

Jenni did what Jenni does. “Verne is in the house,” she sang and she kept doing it until he came up on stage. Turns out he and Jenni’s keyboard player, Kent Baker, are old friends, so Kent turned the keys over and Verne soloed with the band on Fly Me to the Moon. 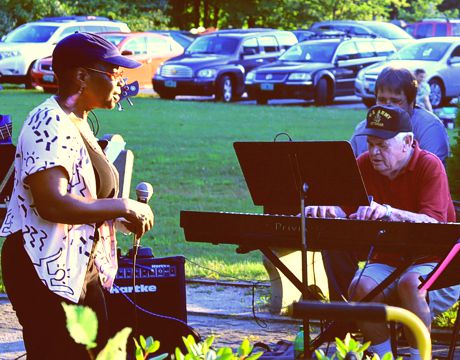 As an aside, Verne has played for every Cardiac Capers hospital benefit since the beginning and hopes to again this Fall.

Last season, we started introducing the musicians who will create the future of Summer Sounds. These young performers are our opening acts or, as last night, our “middle acts.”

Jaylin Seaman took over the mic for a short set of modern songs as well as a couple of show tunes and wowed the crowd again.

“That girl is headed to Broadway,” Jenni said.

Local community groups host our concerts with a social that usually includes munchies, grilled foods, or desserts. Last night Taylor Hall led an MVUHS group raising funds for a school trip to the presidential inauguration. They had a new table of actual food. I smartly extracted a promise that they would take no tomatoes to Washington, though.

Two of Jenni’s “Junkettes” closed the show with Jenni on Mustang Sally. The Junkettes are four of Highgate’s own young people who have grown up dancing and singing to Jenni’s performances here. Here they are in 2009. 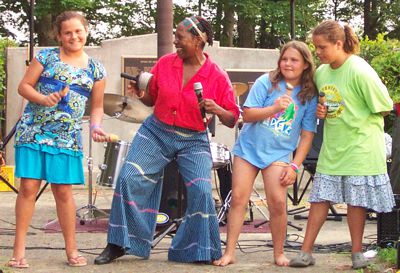 Now they’re all growed up and in college. 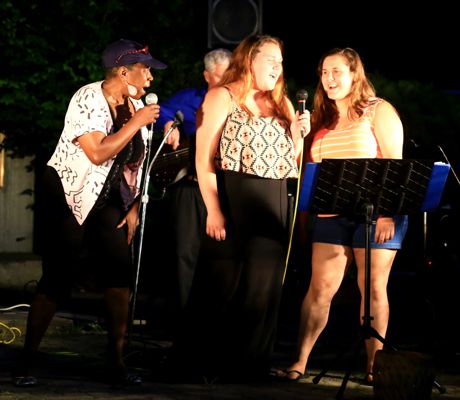 1 thought on “I Love It When a Plan Comes Together”