Today is Memorial Day in the United States. The holiday once known as Decoration Day commemorates the men and women who perished under the flag of this country, fighting for what sets our America apart: the freedom to live as we please.

The Uniform Holidays Bill which gave us some 38 or 50 Monday shopaholidays moved Memorial Day from its traditional May 30 date to the last Monday in May. Today is May 30. Salute. Proudly. 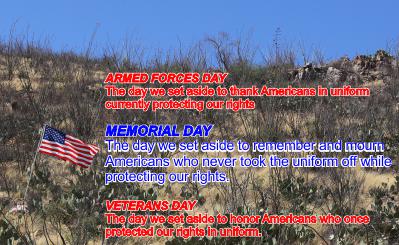 Lest we forget, the Americans we honor did not “give their lives.” They did not merely perish. They did not just cease living, check out, croak, depart, drop, expire, kick off. kick the bucket, pass away or pass on, pop off, or bite the dust. Their lives were taken from them by force on battlefields around the world. They were killed. Whether you believe they died with honor, whether you believe our cause just, died they did.

Rolling Stone reports that the U.S. has been at war for 2,687 days under this Administration. That’s more days at war than under Abraham Lincoln, FDR, Lyndon Johnson, George W. Bush or any other president. (I was unable to confirm the number since today is the 3,053th day since January 20, 2008.)

More than 666,000 Battle Deaths have occurred since the U.S. was founded.

“All persons present in uniform should render the military salute. Members of the Armed Forces and veterans who are present but not in uniform may render the military salute. All other persons present should face the flag and stand at attention with their right hand over the heart, or if applicable, remove their headdress with their right hand and hold it at the left shoulder, the hand being over the heart. Citizens of other countries present should stand at attention. All such conduct toward the flag in a moving column should be rendered at the moment the flag passes.”

The American flag today should first be raised to the top of the flagpole for a moment, then lowered to the half-staff position where it will remain until Noon. The flag should be raised to the peak at Noon for the remainder of Memorial Day.

There is no end to the mutts who would kill our men and women in uniform even faster than they would kill their own. If I had but one wish granted on this day, I wish not another soldier dies. Ever. But die they did around the world again this year and die they will. For us. For me.

Because those men and women died, I get to write these words again this year. And you get to read them. You get to rail about Islam or Presbyterianism or Frisbeeism without fear of the government. And I get to read it. Please pause and reflect as you go to a concert, stop at an artist’s studio, grill a burger, or simply read a book in the sunshine the price we pay to keep our right to do those things. Remember a soldier who died in combat today. Thank a living soldier today. And then do it again tomorrow.

Editor’s Note: This column is slightly updated from one that first appeared in 2008.