Another of our randomly local stories.

Street sign theft has become a budget issue for a many municipalities. Peeps steal the signs as pranks, on a dare, for decoration, and even to claim the sign was missing to beat a ticket. “Signs that are unusual or amusing tend to be stolen more frequently.”

The theft is often costly and inconvenient (and can possibly be dangerous) for the municipality or agency that owns the sign. In the United States, street signs generally cost between $100 and $500 to replace although, according to the Washington State Department of Transportation, the bigger freeway signs cost between $30,000 and $77,000. Radio host Dori Monson has a word or two to say about that on MyNorthwest.com.

I know I’m tempting fate but I’m pretty sure no one has ever stolen North Puffin’s Abblesnaffy Boulevard sign.

The road has been known as Katies Crotch since long before there were street signs in town but no one fesses up to knowing why. There used to be a tavern run by a woman named Katie on that road. We don’t know what kind of Katie she was, but eyebrows generally wiggle when that story is told. Another explanation leaves out the tavern but has that a woman named Katie used to live on the road and would sit on her porch wearing no underwear. Eyebrows waggled a lot more with that. A less intriguing story has it that a family with the last name Katie used to live at the intersection with Route 16, and “crotch” referred to the V shape of the intersection. I think it’s named for the tree that grew there that six-year old Katie climbed and perched in before she was taken from us in that unfortunate accident with the timber truck and biplane.

That sign may be the most stolen in the country. The Selectboard chair says the thefts occur so frequently that “you would think every dorm room in the state of Maine should have one by now.” It cost $200 last year alone, not including labor, to replace the one road sign in Embden. A previous motion to rename the street failed in 2012.

Fortunately, the measure for a new Interstate with an Embden exit (and the accompanying $30,000 sign, approximated below) also failed although Troy, Michigan reports that their Big Beaver Road, Exit 69, is only the seventh most stolen road sign in the nation. 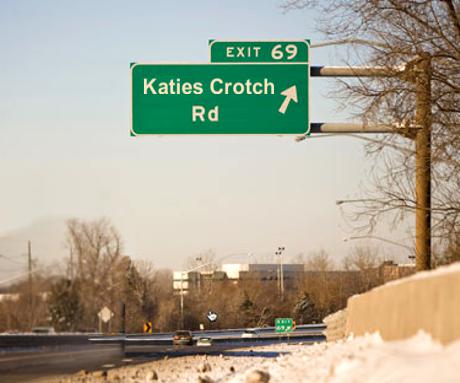