A few weeks ago, I boldly predicted that the general election would be Trump v. Sanders.

The candidates the media pretends can’t win:
A Wall Street Journal editorial says Donald Trump taps into the worst of the electorate.

The harsher Des Moines Register editorializes that Mr. Trump should “pull the plug on his bloviating side show.” Bloviating?

The candidates the media pretends can’t lose:
The NYTimes reports ever so hopefully that Gov. John Kasich is rising in the polls in New Hampshire, winning endorsements and drawing new voters to his appearances who were impressed with his debate performance.

The Atlantic calls Maryland’s Martin O’Malley “a Democrat’s dream candidate. In two terms as the governor of Maryland, he’s ushered in a sweeping liberal agenda that includes gay marriage, gun control, an end to the death penalty, and in-state college tuition for undocumented immigrants. He’s trim and handsome; he plays in an Irish rock band.”

“He has become ‘the distraction with traction’ — a feckless blowhard who can generate headlines, name recognition and polling numbers not by provoking thought, but by provoking outrage.”

Back to Mr. Trump and Mr. Sanders.

One candidate attracts working class voters with caustic slander about entitlement and abortion and Iran and the economy and repealing the 2010 Unaffordable Care Act. He does not provoke thought, but rather provokes outrage.

Mr. Trump can’t win. Except he got a better reception at the Iowa State Fair than Sarah Palin, Barack Obama, or George W. Bush.

And Mr. Sanders can’t win. He even schooled Chuck Todd on why he is nothing like Donald Trump. Except he’s wrong again; he’s exactly like the Donald, a blowhard who has tapped into the same sentiments for overthrowing the status quo.

And maybe that’s not such a bad thing.

Now for the Veep.
Getting the work done probably means having an actual politician around for those days you have to game the system. Elect a politician Vice President.

Messrs. Kasich and O’Malley both talk a good game. Both have achieved big political gains within their own states.

I think either would make a great V.P. for their respective parties. 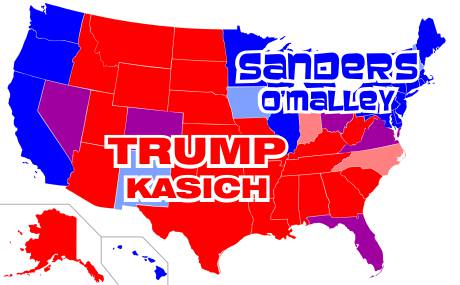 None of this is a particularly good thing for the U.S. of A.