“We need to go on strike!” My friend Lido Bruhl shouted.

From the You Can’t Make this Stuff up department.

“They can’t rise if the minimum wage is too low to live on,” democratic candidate Hillary Clinton said in a speech Friday.

The minimum wage is the least an employer can pay an hourly employee; it has been pegged at $7.25 an hour since 2009; some states and cities have raised their minimum wage higher than that.

Many politicians want to raise it to $15/hour.

Just 4.3% of hourly workers 16 years old and older earn at or below the prevailing minimum wage but 42% of all U.S. workers earn $15 or less. Since about 60% of the U.S. workforce of some 122.9 million full time workers overall are paid hourly, more than 70 million workers now make less than that magic $15/hour. (BLS defines full-time workers as those who usually work 35 hours or more per week.)

“We need to go on strike!” Lido “Lee” Bruhl is a now retired newspaper editor who lives on Social Security with help from his wife and his daughter Greta.

What’s a state-run lottery?
It’s another extra tax on people who can’t do math.

Let’s start with some basic facts about Social Security today.

“If it weren’t for Social Security more than one-third of us older Americans would be living in poverty,” he said. “As it is, we worked all our lives and now we’re living on minimum wage!”

Regular readers may recall a chart I created last year to compare the minimum wage with the Federal Poverty Line. People working for minimum wage have consistently earned more than the Federal poverty level every year since 1957. Here are those figures updated. 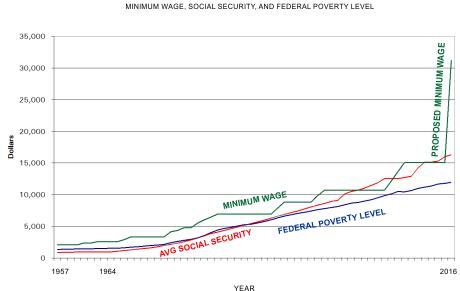 There are 41,362,000 elderly recipients. About half of them receive the average “benefit” of around $1,300 per month or less. That’s about $43 more per month than minimum wage. And it is considerably less than that after deducting for Medicare premiums.

We don’t need to argue about whether “poverty” in the United States doesn’t look at all like the hand-to-mouth existence of the poor in, say, Mexico. If you can afford cigarettes and a smart phone, you aren’t poor.

Now for the politics (and you thought I’d never get here).

The American retirement system is designed so smart politicians can keep American workers and retirees alike in servitude to the government but the idea of raising the minimum wage is designed for people who can’t do math.

Want to know why politicians want the minimum wage to rise?
The income tax you pay goes up when your paycheck goes up.

Want to know why politicians want wages to rise?

What happens when 70 million people get a raise to $15/hour?

The first thing that happens is a brief surge in government revenues as payroll taxes skyrocket.

The second thing that happens is 25 million people get their hours cut. The politicians forgot that part.

The third thing that happens is 25 million new unemployment applications. The politicians forgot that part.

The fourth thing that happens is 10 million pissed off workers because they no longer make more than minimum wage. The politicians forgot that part.

The fifth thing that happens is an inflationary spiral. The politicians forgot that part.

The sixth thing that happens is an increase in the Federal Poverty Level. The politicians probably remembered that part.

And almost 21 million Social Security recipients won’t be able to afford the stamp to write to their Congress Critter because they will suddenly be back under the poverty line.

My friend Lee Bruhl was right.

We need to strike.

He’s just wrong about the reason.