Another in the continuing saga of South Puffin maintenance. When my dad died, he took with him the stove, television, stereo receiver, OTA Interweb modem, and pretty much anything else that plugged in.

Now I find out he forgot to fix the roof, too.

I found a few little leaks here when I got back here in November. Bought a lot of buckets. Started looking for ways to repair it and for an engineer to “bless” my drawings for a clerestory “bump up” that will solve all my problems: room for insulation above the roof deck, a better roofing material (steel panels), and more.

Old retired (Florida-licensed) engineers are surprisingly hard to find in the Keys and the couple of guys with shingles out are backed up until June.

Meanwhile, I have to patch the leaks. Happily, we didn’t get much rain over the winter and the buckets mostly worked, even when Rufus was here.

Like most “low slope” roofs, this house has a Built Up Roof.

“Please don’t make me crack open a browser to look stuff up in order to understand you!” Liz Arden said. 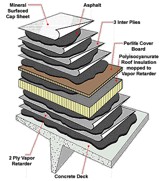 Built Up Roofing is (somewhat) self explanatory in that it is a waterproof covering made of layer after layer applied to the roof deck. Tradesmen refer to Built Up Roof membranes by the acronym “BUR” or, more commonly as “tar and gravel” roofs. The roofer applies alternating layers of bitumen (tar) and reinforcing fabrics such as tar paper or “felt” to create something that looks a lot like a single, gihugical (< ==technical term) shingle. In other words, the roofing crew mops down hot tar, lays tar paper in it, mops down more hot tar, lays tar paper in it, and so on. Once they have enough layers, they spread a couple inches of stone on top.

Built up or tar and gravel roofs have been in use for more than 100 years. Sometimes, the base sheet is mechanically fastened. Better is when they are fully adhered, meaning the first layer of tar “glues” the felt directly to the roof deck or insulation.

I planned to simply add a layer of bitumen to the top layer of felt so I had to get move the stone off.

Tax Day: I finished clearing all the stone and swept everywhere I will patch. I also cleared and swept an area down over the overhang but couldn’t get down into the stone embedded in that top layer of tar.

This is going to be harder than I thought.

I got plenty hot and sweaty but didn’t get any deeper into the roof surface. Very disappointing.

I also discovered that my roof work will cause me to do a lot of vacuuming. The entire living room got covered by white grit.

Spudding is removing the gravel and some bitumen from the top layer of the roof membrane by chipping or scraping.

I bought an ice scraper at Home Depot. Really. And I commenced to spudding the roof.

In the meantime, I bought out Home Depot’s peel-and-stick Weatherwatch and decided I should wander down to General Rental to rent a 100-pound roof roller. And then went to sit in the Atlantic bathtub.

I draped the rest of the furniture against dust. Bought more drop cloths and two gallons of milk.

But I didn’t get a roof roller. General Rental is now “Sunbelt Rentals,” a national, full-service rental company with more than 400 locations. And they open only M-F here in Marathon.

I need help so I called my friend George.

OK, George is actually Jorge but most Jorges here say George. He and one of his buddies showed up around 9 ayem yesterday to scrape the rest of my roof.

Finding George was a lot tougher than I expected. None of my other friends or acquaintances or even friends of acquaintances were willing to go up there and I looked for a couple of months.

It was brutal up there. I worked pretty much the whole time George and George’s cousin were there but I didn’t work as hard, scraping up that rock-and-tar. Still, I was the last man off the roof because I still had to clean up the jobsite when they gave up for the day.

While we were working a city cop with a deputy sheriff backup stopped by on code enforcement. See, we can’t do commercial work on a Sunday here in South Puffin but owners can do anything. He saw I was up there sweating and said, “Have a nice day.”

He wouldn’t come up and help though.

Next up, a sad predicament. The tar repair I did last year was so good, it was unremovable. George’s cousin busted right through to the roof deck and stopped. Called me over.

Roof deck looks good which is most excellent news.

I took over that part and stripped an area probably 8×8′ but I’ll open it up the remaining three feet to the east because that takes me right to the edge of the roof and makes the transition to the existing felt much shorter and much less likely to leak.

George and his cousin did a decent but not perfect job yesterday. I scraped a bit more and then started getting ready for the peel-and-stick.

I worked for a while in sunlight and then rigged a clamp on shop light on my circular saw extension stand. Worked a treat.

Between the new shop broom (best shop broom I own, bar none) and the electric leaf blower, I got the surface pretty well cleaned. Laid some Weatherwatch. I didn’t nail the edges or seal them, so I really hope for continuing dry weather. I also ran out of time and steam and roofing before I got to that open section. One can see light through the holes there. I really really hope for continuing dry weather.

My sweaty work shorts from yesterday still haven’t dried out.

George was here before 8 this morning to finish up but it killed us again so he’s gone for a while until the schefflera puts that section in shade.

I hope all this works.