I’ve been (mostly) on vacation this last week. Oh, I took care of a couple of client problems and I did some webwork but mostly I worked on my tan and irritated SWMBO and the fair gekko.

We went to Vegas to poke around Fremont Street (the “old” casinos) and to see Kà. In between we went to the Circus Circus amusement park and took in a couple of circus acts and I spent a dollar in the only slot machine I could find with a handle. I took 300 or so exposures from which I’ll get a bunch of snapshots and half-a-dozen salable prints.

I really, really want a backstage pass to Kà. The Cirque du Soleil’s coming of age story of a young man and a young woman features phenomenal stages. Oh. It has 80 artists and is a “gravity-defying” ballet of music, acrobatic feats, Capoeira dance, puppetry, and martial arts. The Los Angeles Times wrote that it “may well be the most lavish production in the history of Western theater. It is surely the most technologically advanced.”

The two moving stages and five smaller lifts and platforms float through space. The Sand Cliff Deck, their largest moveable platform, measures 25x50x6 feet and weighs 50 tons. It moves up and down 72 feet, rotates 360°, and tilts from flat to 100°, all on a vertical gantry crane and four 75-foot-long hydraulic cylinders. This is material handling design heaven, baby.

On the other hand, we did get a backstage pass to the Hoover Dam. The Bureau of Reclamation had shut down the hard hat tours of the power plant and inner tunnels after 9/11 but they do guide visitors through the power plant and the passageways within the dam itself.

It should come as no surprise that most of the hardware looks like it came from the railroads. Except for the leaning power towers. Likewise, it should come as no surprise that about a quarter of the visitors on most tours are engineers. We had a mechanical (me), three EEs, and an engineering tech who does the real work. No Civil Engineers, though, despite the gazillion (<==technical term) tons of concrete floating free between the walls of the Colorado River.

It should come as a surprise that the U.S. Bureau of Reclamation has its own police force.

A quick kvetch about the prices. It cost $7.50 to park near the downtown casinos but parking was free on the Strip. Circus Circus’ Adventuredome 5-acre indoor amusement park offers the yellow Loco and the pink Canyon Blaster roller coasters. Pink, a double-loop, double-corkscrew, literally shook the building (for the record, a roller coaster is just another big package delivery system). Each was $10 per ride, though. We passed on the $60 Kobe hamburger with truffles. The Hoover Dam dimes and quarters visitors, too. $10 to park. $30 for a tour. And, of course, lots of different people giving lots of different directions. “Sit here.” “No, stand there.” “Sit on the Group W bench.” “Go to the observation deck.” “No, go to this video.” My National Parks pass didn’t work there, either. 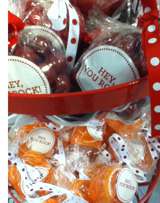 At the other end of the price spectrum, we did eat at Ellis Island (the original pub was opened in 1967 by Frank Ellis) where we missed the nightly karaoke but sampled the in-house microbrewery. We were running a little late for Kà so they seated us in the bar with a nice bunch of other diners. The microbrewery sold me a $2 pint of a pretty decent American IPA. I shall say little about the boilermakers other than to note that they make one with Jägermeister and their own old fashioned “real brewed” Root Beer.

In Phoenix, the Windsor neighborhood bar and restaurant is right next door to an ice cream and candy shop. We took a trip down memory lane with the “penny” candies. That’s a place I’ve visited before (we were aghast that penny candy could cost more than quarter gasoline) but the food was great.

I’ve done a lot of walking. Time to change my feet.