I grew up in the middle of farming country where we always had dogs and cats who could be outside whenever they wanted. I’ve never quite figured out this walk-around-with-a-plastic-bag routine people without room for dogs to run engage in.

As a wee child, I ate Fig Newtons and pulled the tail of Jason, a great, golden-fleeced tomcat, on my grandmother’s bed. Jason tolerated that until I started to walk. Then he beat me up. I still like cats.

We can’t have another cat, though. Every family has one perfect one. Ruff (pictures here) was ours.

We rented Ruff to a friend when we went on vacation one year. He immediately trained his temporary owner by finding a hiding place. Temporary Mom went ballistic trying to find him.

“We moved every piece of furniture 300 times,” she said. “And we ran up and down the roads calling him until midnight.

“I couldn’t sleep. Every time I heard a noise, I’d have to get up and look for him. By 4 a.m., I had decided to tell you I took him back to your daughter’s and she lost him!”

Darn cat came out, “Meow?” from hiding about breakfast time.

His temporary mom not only allowed him to sleep in her bed after that, I suspect she doubled his rations, too (that means two scoops of kitty kibble and all the mouses he could eat). Ruff is the only cat I know who has lost a dead mouse. It confuses him terribly when that happens.

We always had dogs as I was growing up. Monty was a mutt who knew to lick the butter off the toast and bring it back for more. Misty (Christmas Mistletoe) was a beautiful collie who fell in lurve with Marshall Jones’ magnificent farm collie up the road. The result was a litter that included Ferocious who went to friends and Rover who was mine. Rover had some cognitive problems after the incident with the eggnog, but that’s another story. He was a sweet, lovable, perfect dog for a boy with a bicycle.

My folks changed to labs after I went away to college.

I split the difference when we moved to Vermont and found a puppy from a tri-color collie bitch in her first heat who showed a champion yellow Lab field dog a good time in the dark of night. We named that puppy Dogg (the second “G” showed his class).

Dogg raised our kids, swam in an innertube, and was always, always at my side. Except when he slept with Ruff. He was bumptious and Lab-smart, but he looked like a big, black, farm collie.

I almost gave up on having dogs when he finally wore out. 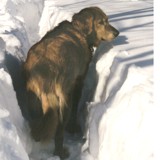 Ruff made me change my mind. He was lonely.

The local used dog store had a fine weekend special: take a dog home for a test drive. Daughter Kris called us to say they had a Golden Retriever with my name on it so we brought her home for Ruff’s approval.

She whined. She didn’t bark. Ever. I had to teach this dog to bark.

Her name tag said she was “Dandy” but she wasn’t. We renamed her Gwendolyn Dandelion Whine. Wendy Whiner for short.

We once rented Wendy to a family in Burlington. They had recently lost their own dog and wanted to “try out” having another one underfoot. She was the kind of dog who is underfoot all the time. She leaned, she coaxed, she whined, she hoped. She ate with them, played with them, frolicked in the rain with them, ate their popcorn and table scraps, and slept in their beds. Guess where she expected to sleep ever after? 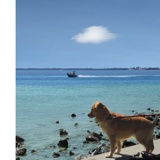 I need a dog but I travel. SWMBO travels. We’re just not in one place enough to be fair to a dog.

So Dan was walking Bridget’s tan dog-shaped-dog yesterday. Another friend, Katie, is down from the U.S. for a while and has a gig dog-sitting for a family the next street over. As far as I can tell, they have five dogs, all large.

I don’t like walking and poop-scooping for dogs. I like playing catch and lounging. I’m thinking every neighborhood should have borrowable dogs — real ones, not these yappy little rats-on-leashes you see here — that we could simply check out for a quick romp, then return. Berners and Collies and Goldies and Labs and Newfies and Shepherds. Dogs with fur. Dogs with personality. Dogs who understand roughhousing.

Meanwhile, if you see a bearded man shambling down the street and groping every dog on the way, be kind.