This is a story of unintended consequences. And of the unconsidered effects of law. 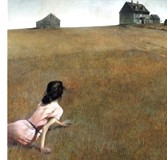 We listened to the podcast, Naomi’s World last week. The Truth takes a surreal — and fun — turn on a trip to the Museum of Modern Art in New York City. Go listen. It’s good.

Anne asked me about Andrew Wyeth and his son, my contemporary, Jamie. We got to wondering how artists like Jamie Wyeth cope in this day of Obamacare.

Disclosures:
1. My mom knew Andy. I think I have met Jamie but I have no “inside track” about his insurance and nothing in this column came from him.
2. I chair a small arts council (a “Local Arts Service Organization”) and worked to create a group health insurance plan to lower the cost for artists.

Does Jamie Wyeth collect social security? Is he on Medicare? Does he have to buy insurance under Obamacare?

The third generation of the Wyeth family of painters, James Browning Wyeth was a participant in NASA’s Eyewitness to Space program during the late ’60s and ’70s. I was privileged to exhibit his Support at left and Apollo 11 One, Two, Three when we brought the NASA art exhibit to St. Albans aboard the ArTrain.

He is three years older than I so we thought he might not have to fight with the Obamacare Exchange.

“If you’re over 65, you’re eligible for Medicare,” Mr. Obama and most other people including every Exchange “assistant” I’ve talked to as well as Rufus believe. “I thought 65 had always got you Medicare,” Rufus told me.

When you work and pay Social Security taxes, you earn “credits” toward Social Security benefits. If you were born in 1929 or later, you need 40 credits (10 years of work).

Most people get hospital insurance [Medicare Part A] when they turn 65. You qualify for it automatically if you are eligible for Social Security or Railroad Retirement benefits.

Ernest Ackerman got the first ever Social Security payment, a lump sum of 17 cents, in January 1937. This was a one-time pay-out, the only form of benefits paid during the start-up period January 1937 through December 1939. Ida May Fuller of Ludlow, Vermont, was the first recipient of monthly Social Security benefits. Medicare was passed into law in 1965; the first beneficiaries signed up for the program a year later. Former president Harry Truman received the first Medicare card but not everyone over 65 can get one.

Turns out Mr. Obama — and most of the rest of us — got it wrong. Again.

As far as I know, Mr. Wyeth has never had a day job.

If you are over 65 and aren’t eligible for Medicare, you may buy a plan in the Exchange. However, you will not receive a subsidy.

Mr. Wyeth is over 65 and could be required to buy insurance on the Exchange. The good news is that insurers are required to offer him a policy and that he can most likely afford the premiums. The bad news is that other artists are not so fortunate.

I’ve covered why you might not be eligible for Medicare. You are eligible at age 65 if you:
• Receive Social Security or railroad retirement benefits;
• Are not getting Social Security or railroad retirement benefits, but you have worked long enough to be eligible for them;
• Would be entitled to Social Security benefits based on your spouse’s (or divorced spouse’s) work record, and that spouse is at least 62;or
• Worked long enough in a federal, state, or local government job to be insured for Medicare.

The definition of a successful artist in Vermont has long been “an artist with a working spouse.”

It is 3°F in North Puffin as I write this. Gonna be some other artists out in the cold this winter.