Other than boredom it was a mostly uneventful trip.

I left North Puffin on Wednesday and rolled into South Puffin Saturday night. Spent a couple of nights in the Postel and even gunkholed around North Florida.

It was pretty much smooth sailing the entire trip, even around DC. I probably could have driven a brass band down Pennsylvania Avenue but I went out around the Beltway instead. From DC south, I traveled 25 or 30 miles at no more than 20 mph ever. Ycch. And then traffic cleared up. No rhyme. No reason. No explanation.

The cruise control on the truck went wonky after a gas stop. Its indicator light flickered on the dash and the cruise itself wouldn’t engage. I pulled over, rebooted, and Bb’s yer uncle. 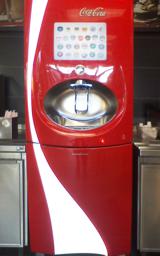 The pininfarina fountain Coke machine at the fast food joint blew me away. Coke says the Freestyle is a touch screen soda fountain introduced in 2009. It features over 125 different Coca-Cola drink products, and custom flavors. The machines are currently located in major Coca-Cola partners and retail locations as a part of a gradual and ongoing deployment. The cabinetry was indeed designed by pininfarina, via their Pininfarina Extra industrial and product design subsidiary. It uses microdispensing technology and the proprietary PurePour technology, both of which originally developed to deliver precise doses of drugs.

Speaking of such things, I forgot to pack any water in any of the coolers. I’ve been drinking Pepsi™. A lot of Pepsi™.

I passed an older gent driving a car with the Ontario plate I’M ALIVE and my first thought was, what would the EMTs think?

I drove about 700 miles (694 but who’s counting) from the Postel and settled in a Motel 5 in Walterboro which is nowhere near Brennanboro or even Matthausboro. I couldn’t find the light switch (they forgot to leave one on) but they had left the air conditioning running full blast. Cold in that room. 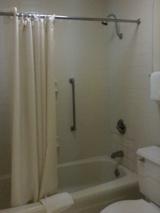 In addition to the Tom Bodette commercials, that chain is famed for shower heads installed by dwarf plumbers standing on their knees. This one had had a renovation that included a new shower arm. Long. Curved. Downright amazing.

There was nothing on the schedule at Cape Canaveral. There’s a MAVEN launch (Mars Atmosphere and Volatile EvolutioN) on an Atlas V from Pad 41 on November 18. Anne and I may come back up for that launch if we can also hook up with a friend who lives in New Smyrna Beach.

The “blue routes” attract me; I like to poke around there whenever there’s time. I cut away from I95 to saunter through Palatka and Deland, simply because I’d never been to either.

Palatka. What a great sounding name. Palatka. It just rolls off the tongue. “I had a falafel in Palatka.” The county seat of Putnam County is a small town by all standards with about 10,000 residents. It’s home to St. Johns River State College and Ravine Gardens State Park and the Florida Azalea Festival and the Blue Crab Festival plus Victorian, Colonial Revival, Art Deco, Classical Revival, and Prairie School buildings.

DeLand is home to Florida’s oldest private college, Stetson University, as well as the Museum of Florida Art plus the wild persimmon trees that grow around the natural springs. I didn’t have to take the steamboat up the St. Johns River; I just drove .

Some how I missed all the festivals, the skydiving, and the Annual Dog Parade. Worth a trip back on a sunny day, I’m thinking.

I have put air inna bike tahrs, beer inna mug, and the iPod inna plastic bag. Orf to the beach.