Congress is in recess so I had to go elsewhere for the weird news of the day. 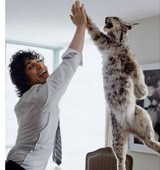 “Naked drunk guy steals bobcat” conjures up thoughts of animal abuse at the zoo. Or worse.

My friend Roland Riviere has lived all his life in Vermont’s Northeast Kingdom. National Geographic magazine chose the Kingdom as one of the top U.S. travel destinations, partly for the rugged scenery and partly for the chance to see a wily catamount.

The cougar (Puma concolor), also known as the mountain lion, puma, panther, or catamount, is a large cat native to the Americas. Vermont is catamount country and the predator cat is a popular name in Vermont. We have Catamount trails, Catamount beer, Catamount Health, and more, but the catamount itself is officially extinct. The U.S. Fish and Wildlife Department says the population most likely vanished in the 1930s.

Still, people regularly claim to see the big cat on the prowl. The Vermont Fish & Wildlife Department investigates about 50 sightings a year.

Roland didn’t have much to do last weekend so he spent a little too much time in the State Fair beer tent. The longer he spent there, the better starting a catamount breeding program sounded. Even better, one of his drinking buddies reported seeing scat and paw prints just north of Lac Wallace in Quebec. Late Saturday night, Roland loaded up his Hav-A-Heart trap and crossed the border into Canada. His GPS took him straight to the buddy’s camp.

The Lord watches over drunks and small children. He baited his trap with a cold Big Mac he found under the truck seat and settled in with a six-pack. A couple of hours later, a screech from the trap woke him. He saw an unhappy, 35 pound cat.

“I thought it was a cub,” Roland told the Customs officer who caught him.

“A 19-year-old Tennessee man was arrested Sunday and charged with felony theft and a short list of misdemeanors after he allegedly got drunk and stole a Bobcat front-loading utility vehicle from a Knoxville-area nursery.” He was just trying to hide his nudity, he said.

Of course, the Knoxville News Sentinel, quoting the arrest warrant, reported the loader theft was all a case of criminal cover-up.