At 11:59 p.m. tonight, not 12 hours from now, millions of Americans including Rufus will make their annual mad dash to the post office.

Filing High
I e-filed for the first time this year. Tubbo Tax was a little confused because I didn’t owe any extra and wasn’t due a refund

I shouldn’t be worried, right?

This little box came up at the end of the filing status:

How to check your refund status?
Download the MyTaxRefund app and check your status anywhere.
Available on iPhone, iPad, and Android devices.

And then! And THEN!

What? Are they nutz?

Taxation WITH Representation
An Internoodle meme going around states incorrectly that Americans paid no taxes before the Income Tax was made permanent in 1913.

The U.S. did impose income taxes during the Civil War and again in the 1890s to pay for war expenses but didn’t make them permanent until 1913. Up until then excise taxes on alcohol and later added to gasoline, tires, telephones, tobacco, and a host of other commodities raised a lot of money to fund the government. Tariffs raised even more. Tariffs were the largest source of federal revenue (and the easiest to collect) from the 1790s until the income tax started growing.

Tariffs were one of the major causes of the Civil War.

We’ve also had property taxes since colonial times; in fact, the only reason we could go to war against Britain is that we had well-developed tax systems in place to pay for it. By 1796, seven of the then-15 states had poll taxes. 12 taxed some or all livestock. All taxed land one way or another. Most taxed specific occupations.

We the Overtaxed People have been that way since before we threw the (taxable) tea in the harbor.

For the record, I support (a) the flat income tax and (b) elimination of all other tax methods including corporate taxes. People have the right to be taxed fairly, the right to know how much is coming out of their pockets, and the right not to be taxed two or three times on the same income.

Tariffs, excise taxes, sales and value added taxes, and even property taxes are the most regressive way to raise money from a population.

Alabama and Mississippi which have no state minimum wage charge sales tax on food (and they’re not alone). Let’s assume you live in Birmingham in the forward thinking state of Alabama and make $7.50 per hour. You don’t make enough to owe any income tax but we’ll still get you.

Americans report spending $151 on food per week on average but let’s assume you can’t afford to spend half your gross paycheck at the grocery.

If you buy $100/week in Alabama groceries, $8 of that goes to the state. That’s a tax rate of “only 2.66%.” Add in the tax on your phone and cable and apartment and gasoline and it’s easy to see how someone earning minimum wage has a higher actual tax rate than Warren Buffett.

We’re from the Government; We’re Here to Help You Get Healthy
My friend Kay Ace visited the doc a couple of times recently. She was in just before Christmas for a well-grownup, six-month checkup. And she went in last month with that crud going around.

“Obamacare: We’ll save you money®.” 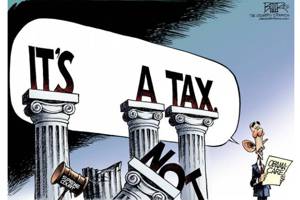