OK, that’s not exactly true, since I’m on NTFS and haven’t used FAT for years but I do have a lot of files.

I don’t make a living at photography but I do shoot to sell and that means I have what we call in the trade a “lot of shutter actuations.”

Three of my cameras since the 1980s really stand out: a Canon A-1, a Kodak DC-4800, and the new Canon 6D. Two of those are digital and I’ve scanned at least some of the film I shot before the turn of the Century.

That means my hard disk has gotten fat.

Every new photo from the new camera makes a 21MB file.

Some of those older photos are snapshots. Nice memories. Good for the refrigerator door. Not something I’ll put in a frame in the gallery. The rest are artistic or commercial.

2,127 shots in the 12 weeks since I bought the new camera, and another 300 keepers (576 files) out of those for 8.3GB. I’m ‘shopping and printing a far higher percentage of the originals than I did with any of the other cameras.

Assuming I might realistically keep 1,000 photos/year and print 200 of them, I’ll need 30 or 35 GB of new file storage each year just for gallery photos. That’s not as bad as I first thought but it’s still a lot to fit on my local drive so I went looking for online storage.

Hmmm. Justcloud.com (something I’d never heard of), Backblaze (ditto) and a couple of others are under $50/year for unlimited storage with file versioning and more stars in reliability than Sugarsync or Carbonite.

Meanwhile, I ordered a 2 TB external drive because I need room for my next shoot. I did that because I still haven’t figured out how to install a non-RAID second drive in the second drive bay on my laptop. I’d RTM if Lenovo would give me one. I spent a while googling for one and nada.

The FedEx guy snuck the new drive onto the porch the very next day.

It’s amazing how 2 TB appears to fit in the same size box that used to hold 2 MB. The Quick Start guide has three pictures: one of de stuff in de box. One showing how to plug the wall wart into the wall and the drive. One showing the USB cable going into the drive and the computer. 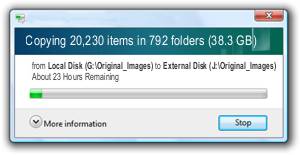 It turns out 22,163 (56GB) in image files of various descriptions transferred overnight the first night. 2,125 are in the dodged-and-burned-and-ready-to-sell category and the rest are originals.

This is becoming a gallery problem as well. About 180 of my fine art photos have moved over to the gallery.northpuffin.com site so far. I could have ten times that many online by the end of the year and that’s simply too too many for visitors (and buyers) to process.

The new camera can shoot production quality, HD video. I dunno what I’ll do if I start shooting video but I think my new hard drive will disown me.