Thanksgiving is a patriotic holiday, sandwiched as it is between Veterans Day and the official beginning of the Christmas Shopping season

Here in the States, we mark Thanksgiving Day on the fourth Thursday of November each year. Our Canadian neighbors celebrated it six weeks earlier, on the second Monday in October. The snow falls earlier in Canada.

Prior to the mid-1800s, Thanksgiving had nothing to do with the 1621 harvest celebration, Pilgrims or Native People. Thanksgiving started as a traditional New England holiday that celebrated family and community. It descended from Puritan days of fasting and festive rejoicing. The governor of each colony or state declared a day of thanksgiving each autumn, to give thanks for general blessings. As New Englanders moved west in the late 18th and early 19th centuries, they took their holiday with them. After the harvest, governors across the country proclaimed individual Thanksgivings, and families traveled back to their original homes for family reunions, church services and large meals.

I expect to have a “traditional” Thanksgiving meal this year, whether I cook it myownself or drive over to the Cracked Conch with Joe and Willie. We’ll have a small turkey with bread (not oyster, thank you very much) stuffing, cranberry sauce, mashed potatoes and gravy, cole slaw, candied yams, green bean casserole, and pumpkin pie for dessert.

Geeks are hoping that upcoming Android release 4.7 will be “Pumpkin Pie” and will also be ready by Thursday.

I AM a lucky boy lucky. My island house value is down so my future property taxes may be lower. My family is scattered across a couple thousand miles but we are all speaking to each other and happily anticipating a blessed event. The brakes work in my truck and that cost less than I expected. I have walls full of my mom’s art, and mine, and a host of other artists I like from Corliss Blakely and Clyde Butcher to Natalie LaRocque-Bouchard and Thomas Sully. Next week, I shall have white meat turkey sandwiches slathered with mayonnaise on good crunchy sourdough bread for lunch every day of the week. Most important, I have been blessed by a perfect time here in my little house.

I’m disappointed, though. People decorate for Halloween and for Armistice or Remembrance Day and for Christmas. Very few put big inflatable turkeys in their yards for this week. 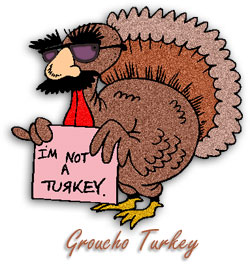 2 thoughts on “Giving Thanks”