When you find a button, push it.

I celebrated a birthday this year. While I still have my whole life in front of me, it no longer seems as infinite as it did forty years ago today. I’m thinking I should decide what I want to do when I grow up.

Although I am indeed more than 50 and less than 100, this is the Internoodle and probably not a good place to publicize the actual day or month or year of one’s birth.

Writer, actor, and Shaq-twin in the cable ads Ben Stein spoke about the happiness that “comes to those who pursue careers that define their passions.” He delivered part of the commencement address he didn’t give at UVM on CBS Sunday Morning and I pulled a quote for an article about an early morning apartment house explosion last month. The resulting fire left one man in the hospital with severe burns and several families homeless. The other six residents of the four apartments, including Jimmy Branca’s family, escaped without injuries.

Despite the fire, despite playing the blues for a living, despite the fact that he says he is “one flat hat away from being an Amish guy,” Mr. Branca is a pretty happy fellow.

“What about the happy people,” Mr. Stein asked in his address. “What did they do?

“They made a decision to live.

“They decided to do what their hearts told them to do, to do what was in them to do. They took risks and they took chances, and they tried a lot of different things until they got to where they wanted to be.”

I’ve been working on my tan. 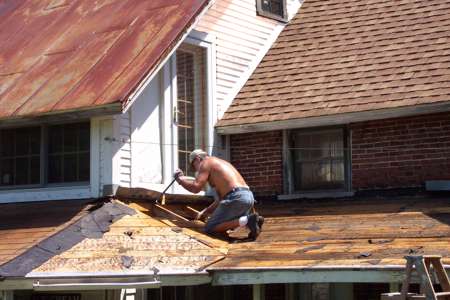 I rebuilt, extended, added an angled entry and reshingled the back porches here almost 30 years ago. The one-by tongue-and-groove lumber that sheathed the original porches could have been 100 years old then. Time and shingles that had developed some leaks have taken their toll. It is time for plywood. And shingles. And some redesign. The new porches will have a nice roof deck, a much better entry, and a garbin.

It gives me a certain amount of pleasure when Rufus, a guy two years younger than I, tells me, “You are out of your mind. After helping you with your porch roof in New Jersey, I swore I would NEVER do roofing again. I was… what?…. 25 years old?

“You are totally out of your f-ing mind. I wish you luck. Seriously.”

And I’m doing it by myself. At my age.

I can almost guarantee I won’t do this again but I enjoy planning a job and really like seeing the physical results. Improving my tan in the process is a nice side benefit.

After our concert last night, I helped the Fire Department Auxiliary take down their folding tent. We didn’t know how it worked until I found a big button hidden in a plastic bracket on each leg.

We each did and the canopy collapsed magically into its carry bag.

I have pursued my own passions but I wonder if I’ve pursued them enough.

Over the years, I have built fine furniture, milked a cow barehanded, raced at Watkins Glen, designed and built a 30′ boat in my barn, taught college, founded a health center, hosted a television program, invented machinery, touched lion cubs and sharks, learned how to make stained glass windows, had dinner at the Tavern On The Green, published more than a half-million words in newspapers, shaved my head, sold and donated photographs, lived on an island, and made two great friends, one via the Interwhatsit although she lives thousands of miles away. Recently, thanks to this blog and the same Intertoob, I’ve convinced all of my rug chewing right handed friends — including the bikers — that I am the devil spawn of Leo Trotsky and all of my loony left handed friends — including the Far Green true believers — that I am the consummate mouthpiece of Genghis Khan. Lots of buttons pushed.

It is time to find some more buttons. I don’t know yet if I’ll write the Great American novel. I don’t particularly want to learn to belly dance but I wouldn’t mind learning to juggle. I want not to worry about bills and taxes and appointments but I may sell my business. I do know I will work to keep my two friends.

You can’t leap over a canyon in two small jumps. And when you find a button, push it.