I don’t care what “they” say at funerals. Losing a family member or a close friend is not a cause for celebration; it’s a time to fill up the hole left in our lives when all we have are memories.

Paul Newman wanted to be remembered as a racer who supported his habit by acting. He died last Friday at 83 after a battle with cancer.

Darn it, that’s like losing a friend who really made it.

We feel that way when a popular actor dies. We invite great actors and writers into our homes and our thoughts and our lives in a way we would never do with an acquaintance down the street. We often spend more time with them and they stay in our memory longer than people we work with or even our real life friends.

“No, it IS losing a friend who really made it,” my real friend “Rufus” said. “You just hadn’t seen him in the last 32 years.”

Well, sort of. We had more of a relationship with PLN than he did with us. See I started driving race cars a year or so after he did. We drove the same tracks at the same times but rarely in the same class. We rubbed elbows and he even helped push my car in the pits. We shared a favorite track (Lime Rock) where he ran some hot laps just this past August. He was always a better driver than almost anyone else I know.

The Oscar-winning actor was intensely private in public but he never played the part of a celebrity at the racetrack. He didn’t play any part there. He was not just there for his good looks. He was a driver

P. L. Newman drove Bob Sharp’s Datsuns in SCCA and in the under 2-liter Trans Am but he won his first race at Thompson Speedway in Connecticut in a Lotus. I may have driven that race in what was then my E-Production TR-4. I went on to muddle about in Camaros in A-Sedan and GT-1 although I came back to the Triumph a couple of times and even drove a Lotus Formula C. He went on to drive B-Sedan, C- and D-Production, and GT-1, a Porsche 935 at LeMans, an assortment of Corvettes, and a Mustang in GTS at the 24 Hours of Daytona.

“If he had started younger,” Bob Sharp said, “he would have been World Champion.” He was simply that good a driver.

It has been a bad year for racing. Phil Hill, our only American-born Formula One champion, died in August. Watkins Glen founder Cam Argetsinger died in April. Jimmy Stewart, who carried the Scottish flag against Stirling Moss, Mike Hawthorne and Juan Manuel Fangio and who inspired his little brother Jackie to go racing, died in January.

I don’t feel the same sense of personal loss about them. See, I didn’t know them.

Paul Newman was one of the good guys. My c.1974 race at Bryar (now New Hampshire Motor Speedway) was red flagged and the entire pack was diverted to sit in the pit lane. The pack inched forward but pit lane was pretty flat where I sat and I couldn’t get the Camaro to roll without starting the engine. Race cars don’t have fans and don’t idle well so no one wants to start one without reason. He was walking through the pits at the time. He grabbed a couple of other guys to push me along. It’s what everybody did.

“Can you send me that picture of you guys at Pocono?” Rufus asked me.

Rufus would like that photo because I was driving his car while he babysat millwrights rebuilding a chemical plant in Houston in 1976. I’m not sure anyone took any pictures although perhaps my dad did. He took a lot of photos over the years. I’ll send it if I can find it. His car wasn’t in the background, though. 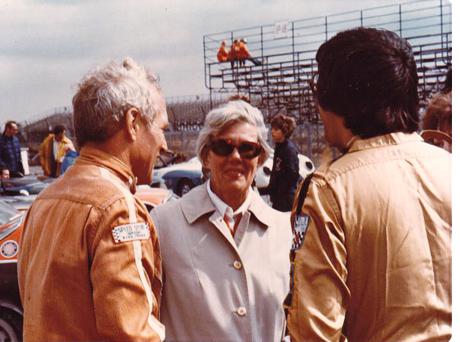 My whole family had come to the race. PLN was also there, driving. He won that race as well as an SCCA national D-production title that year. I introduced him to Anne and to my mom in the paddock. He stood and talked to these drooling women for quite a while, easily. That was my parents’ 30th wedding anniversary which put my dad in that “how do I top this” kind of spot.

Those are some of my memories of a genuine nice guy.